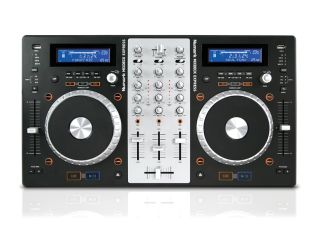 The MIXDECK EXPRESS DJ system is designed to be compatible with virtually any music source that DJs employ, whether it's CD, MP3 CDs, USB thumb drives, DJ software or external sources like a turntable or iPod. Built to provide the full DJ experience, MIXDECK EXPRESS features cue, brake, and reverse controls, a replaceable crossfader, seamless looping capability and large, touch-sensitive platters for mixing and scratching.

Industry-standard MIDI control is included on each deck of this new universal DJ system along with a built in audio interface for DJing seamlessly with a computer. Balanced XLR outputs provide a strong, professional connection to sound systems, and MIXDECK EXPRESS also offers both 1/8" and 1/4" headphone outputs. DJs can mix in virtually any external playback device or microphone using MIXDECK EXPRESS' built-in 3-channel mixer and external inputs including stereo RCA auxiliary inputs and two mic inputs - one front-facing and one rear-facing. Each mixer channel features a three-band EQ with rotary kills. Anti-Shock™ buffered skip-protection technology is included on both CD decks.

"MIXDECK EXPRESS is packed with all the capabilities DJs need to mix from virtually any music source," Said Chris Roman, Numark Product Manager. "It's perfect for DJs who utilize CDs and thumb drives but who also want the versatility that comes with using software like Virtual DJ."