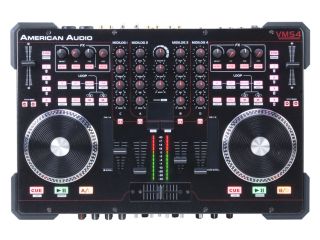 NAMM 2012 PRESS RELEASE: American Audio's original VMS4 4-channel MIDI controller was an instant success, thanks to its switchable MIDILOG channels (MIDI or analog) - allowing it to be used in both the digital and analog worlds - along with an array of pro features that made it easy for DJs to take their performances to the next level.

Now this groundbreaking MIDI workstation is available in a new version that comes bundled with Traktor DJ software. The new VMS4 Traktor even has a faceplate and buttons that were specifically designed for Traktor users, making it a breeze to get started DJ-ing with the popular software.

Offering the same versatility and features as the original model, the VMS4 Traktor includes: 4 USB/analog selectable MIDILOG channels (MIDI and analog); a built-in mousepad that allows DJs to make their selections right from the top of the unit; smoothed audio control faders, knobs and switches to eliminate popping, wiper noise and zipper noise; 2 jog wheels; and the option of being used with an Innofader replacement crossfader (sold separately), typically found only in the top professional gear.