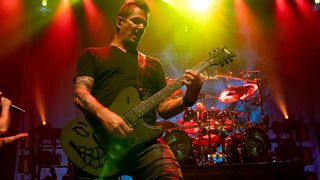 As Dan Donegan of Chicago metal stalwarts Disturbed reflects on his playing and what advice he might offer to keep you on the path of steady progress, he keeps coming back to the value of hard work. Of wanting it more.

How you interpret that is up to you; but however it manifests itself, be it in your practice regime or just simply by living it 24/7, hard work will get you a long way.

In Donegan's case, once upon a time he was working on Chicago building sites framing houses before he threw it all in for the music.

It's an experience that affords him plenty of perspective. A self-taught player, what Donegan prescribes is a common-sense revolution of your playing. He, too, acknowledges that his playing and writing has changed. Why? Because it has to.

Disturbed’s seventh studio album, Evolution, is a distillation of this principal of hard work and never settling in your comfort zone. It sees Donegan swing for the fences, creatively and commercially.

Disturbed’s garrulous frontman David Draiman has likened it to Metallica’s Black Album for the anthemic oomph it adds to a sound that has helped propel the band from the Chicago club scene to arena tours and multi-platinum status.

As Donegan explains, he wants to push it further, keep moving it forward. "To me it’s just music," he says. "Do what you want. I know people think, ‘Oh, it’s risky!’ We do whatever is going to inspire each other. I think we are going to open a lot of people’s eyes to see we are not a one-trick pony." Evolution is the perfect title, then.

The writing process saw Donegan and co. rake through their record collections for inspiration, and it was the classics they gravitated to.

“With this record we looked back at all the great classic rock and metal records, and a lot of classic metal bands were a huge influence on us," he says.

"Like the Eagles, Crosby, Stills & Nash, Toto, Kansas, and all these bands who just had great hooks. Why did those songs stand the test of time. Genesis and Peter Gabriel. We really admired that songwriting back then, and I think that was some of the inspiration this time around.”

That inspiration comes in many forms, but what Donegan advises is that it can come at any time, so you best be ready. Maybe that is what he means by hard work, too. It's not just an appetite to self-promote and to perfect a perfect six-string arpeggio sweep by the age of eight. It's also about being open to song or riff ideas and then being ready to work on them as soon as they come to you.

It's not about being book smart or super-tech necessarily, more about learning to listen to your instinct, and that leads us to his first tip...

1. Learn as much theory as you want but always go with your gut

“It’s music, so there are no rules as far as any instrument goes. For me, being a guitarist, I’m a self-taught player, so everything I do is just following my gut and going for what feels right and sounds right to me.

“I know many guys who are very good theory guys, and very educated in that, but to me they’re limited if they stick within guidelines of theory. You’ve got to push yourself as a player to branch out and do things that are maybe not theoretically correct. But it’s just music, so you trust your gut.

“For me, and for all of use who are self-taught players, it gives us that freedom to explore and just improvise and not limit ourselves, and I think with this new album we branched out quite a bit, and in some territories where we haven’t gone before with the band.

Disturbed's David Draiman and Dan Donegan: the 10 records that changed our lives

“I think, as a player, it’s keeping an open mind. And one other tip I’d add to it as well is play with as many musicians as you can, growing up, because you can learn from each other. Even though I was a self-taught player, I played with all types of players when I was in my teenage years and you pick up things from each other. And I try to apply them to different styles and techniques that I have learned over the years, and apply them to my own playing, but I never limit myself.

“I always try to do something that’s hopefully going to inspire the rest of the guys in the band. That gets trickier. We’ve been together for so long now and we have written over a hundred-and-something songs together, so it’s a challenge for me always trying to push myself to give a new piece of music that’s going to continue to inspire.

“A lot of time when I am home and I’m alone, I am working on ideas, and I’m not worried about what anybody else thinks - what the record label thinks, what the fans or the critics, or radio, any of these, thinks. I’m thinking what my guys whom I am writing with think, because every song starts with something that I present musically to the guys. That’s the only time I ever feel any kind of pressure. I wanna give them something to impress them and to inspire them.”

2. If you want to be the best you’ve got to put the work in

“You’ve got to want it more than anybody else. It’s got to become a part of you. We took that mentality to the band from the early days on, when we got together in 1996, when we first got David. We just became our own promotional machine. We were always out. Every concert that came to town we were out promoting Disturbed.

“To this day, we are hard workers. We are working constantly. I have a guitar that’s on a stand next to my bed, and it’s been that way since I’ve been 13 years old. And my wife probably doesn’t like that I have to have it next to our bed but it’s just one of those things. It’s part of my everyday life. I don’t do it because I have to do it. I do it because it’s in my blood, y’know? I wanna do it.”

3. Ideas can come at you at any time, and you’ve got to seize them when they do

“You just never know when those moments come up to where you feel inspired, and so it’s nice to just have your guitar there to be able to grab and play throughout the day.

“There are those moments when I’ve picked up my guitar in the middle of the night and I started playing a riff or an idea, and one that stands out to me was a new song off the new album called A Reason To Fight. And I had my acoustic guitar next to my bed, and I would start coming up with the intro guitar part, and I was playing it for a long time at the house, and I didn’t quite finish the idea.

“I just had like two parts to it, and my daughter would come into my room, and she was giving me a hard time, saying, ‘Hey, Dad! Are you ever going to make a song out of that? ‘Cos you play that every day. You going to do anything with that?’ She was kind of busting my chops. It wasn’t far enough along where I was ready to present it to David or the guys, but I knew that I liked what I had written so far.

“We were in the studio with Churko [Kevin Churko, producer] and he had walked out of the room. I think he was setting up microphones on the drum kit or something like that. So we were waiting for him. I was sitting in the control room, and I picked up the acoustic guitar and started playing that part, just noodling around.

“David heard it and suddenly, gravitating towards it, said, 'Just keep looping that part, keep playing it over and over,' and instantly a melody was coming to his mind, and it was just an accident because I wasn’t planning on presenting it to them yet. Once I heard the hook in the melody he had on top of that, it was something that we made a priority - to finish the song out and make something. It was just one of those magical moments where we felt it was happening for us.”

4. You can’t force creativity, but with a little help from your friends the ideas and the progress will come

“When you are trying to write or be creative, sometimes you’ve just got to walk up and play. If you are thinking about it too hard then you are forcing it, and the creativity doesn’t come naturally that way.

“Some of my better moments for Disturbed have just come from improvising and not even thinking about anything else - I just kind of pick it up and then play, and those are the things that have developed better for me without trying to force it.”

5. Confronting stage fright can help you become a better player, performer and person

“I’ll never forget my first time as a teenager, performing the first club in front of an audience. I was scared to death. I was white as a ghost, scared to death. And the second I got onstage I had such an adrenaline rush that I knew... It was the complete opposite. I got offstage and it was a drug to me. I felt like I was so scared but I knew that I wanted it again. And I didn’t know how to be a performer just yet.

“It was my first experience of having 200 people stare at us playing songs that we wrote. But once you get a taste for it, once you get up there? For me, as a kid I was relatively quiet and shy, so once I got comfortable on stage it was like flipping a switch. It allows me to be a different person with nothing but confidence and fearlessness. I just loved that feeling. I felt like I could be this person who was just screaming out to have an alter-ego.

“Have that interaction with the fanbase. I do this because I love to perform. I love being onstage. I love the interaction. I love to see their faces and their emotion when we are playing certain songs.

“I just go back to when I was a kid in the audience and seeing some of my favourite bands and you’re looking up at your heroes onstage, and I always wanted that moment where, maybe James Hetfield and I would have eye contact, and as a kid you wanna know that they acknowledged you as a fan.

“So now, for me to be on that side and be a performer, we always do our best to give our fans those moments of making a connection, staring out and making eye contact, and seeing as many people as you can and let them know that we don’t take this for granted, and we look out to them and we want to have those moments of feeling that at the same time.”

Evolution is out on 19 October via Reprise Records.