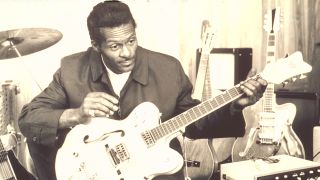 Prominent figures in music, politics and even space exploration - Johnny B. Goode is stowed aboard Voyager 2, Nasa's deep space probe which is the most distant man-made object in the universe - have paid handsome tribute to Chuck Berry, rock 'n' roll pioneer, who died yesterday aged 90.

I am so sad to hear of Chuck Berry's passing. I want to thank him for all the inspirational music he gave to us. 1/3 pic.twitter.com/9zQbH5bo9VMarch 18, 2017

Thou Shall Have No Other Rock Gods Before Him #ChuckBerry rip

Your music rocketed on Earth. Then it went interstellar aboard @NASAVoyager. #JohnnyBGoode #RIP, Chuck Berry. pic.twitter.com/F6hv9OT7yQMarch 18, 2017

Just let me hear some of that rock 'n' roll music any old way you use it I am playing I'm talking about you. God bless Chuck Berry Chuck 😎 pic.twitter.com/XmwmaGzGpLMarch 18, 2017

Heart broken to hear of the passing of Chuck Berry. He was undisputedly the king. A moment of silence is idefinitely n order. RIP

I am so sad to hear about Chuck Berry passing - a big inspiration! He will be missed by everyone who loves Rock 'n Roll. Love & MercyMarch 18, 2017

It started with Chuck Berry. He inspired us all. The 1st album I bought was Chuck's "Live at the Tivoli" and I was never the same.March 18, 2017