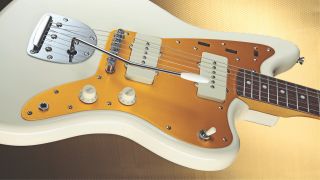 We all have our guitar heroes and we’ve all likely spent a fair bit of time trying to play like them. However, if you really want to cop the sound of your favourite player the obvious shortcut is to use the same gear. You don’t have to break the bank when searching for the best budget signature guitar – there are boatloads of high quality cheap options available to buy.

Of course, cheap is a pretty loose term. Suffice to say in our list of budget signature guitars we’re looking at instruments that top out around the £500/$620 mark. And, needless to say, all the guitars here are available to buy online. We’ve scoured the web to find the best prices for you.

What is the best budget signature guitar?

There’s a mixture of budget signature guitars on our list to suit all kinds of players, but if we had to pick just one we’d choose the PRS SE Mark Tremonti Standard. Combining the company’s renowned build quality and only minor compromises over the higher priced Tremonti Custom model, this really is a guitar we’d be happy to own.

The tremolo arm adds versatility and it’s quite a rare configuration in the PRS lineup too. Most of the brand’s singlecuts feature hardtail bridges, so there’s a bit of kudos to this model. And if Tremonti isn’t your favourite player, his name appears only on the truss rod cover - simply replace it with a plain one. Job done!

Buying a signature guitar, cheap or otherwise, is exactly the same as buying any other guitar – simply choose an instrument with features that suit your playing, right? Well yes, but it’s worth bearing in mind that signature models rarely come with many configurable options – so what you see is what you get.

A few of the guitars here are available with a handful of finishes, but when it comes to hardware and materials it’s pretty much set in stone. Well, set in wood and metal anyway.

And signature models can be contentious. Some will say ‘why play someone else’s guitar?’. We’d happily recommend any of the guitars on this list, but it’s a personal choice for you to make.

Still, the benefit to buying a signature model is that you know the sound you’re going to get. And that’s a great starting point. Think about your playing style too. Is a tremolo important to you or do you prefer the stability of a fixed bridge?

Shredders may prefer a guitar with a higher fretboard radius – a flatter piece of wood and thus easier to burn up with blazing licks. Read on and we’ll look at some of the best options available today.

These are the best budget signature guitars today

There are no options, however. You get an opaque black finish on a solid slab of mahogany, compared with the maple-topped maple/mahogany body of the Custom. None of that pretty flamed maple then.

Still, it’s a high performance guitar. Regularly burn up the fretboard from top to bottom? That’s where you’ll notice the quality – the intonation is amongst the best available. At this price, the Standard represents one of the best budget signature guitars you can buy.

Take a cursory glance at the JEMJR and you’ll be left wondering how Ibanez are able to sell this budget Steve Vai model at such a reasonable price. Indeed, to see that intricate ‘Tree of Life’ fretboard inlay in a sub-£450/$555 instrument really is impressive.

Well, naturally, costs have been cut – you don’t get the DiMarzio pickups or full Edge tremolo system of the more expensive JEMs. But, seriously, these are small compromises and are to be expected. You still get an HSH pickup configuration and a Wizard III neck with a shreddy 400mm radius.

Finishes are limited to two: bright pink or even brighter yellow. But then JEMs were always flamboyant so it’s all good fun. A great shredder worth checking out.

Admittedly, the Wolfgang Standard isn’t a signature model like others in our best budget signature guitars list, but hey, it’s Eddie Van Halen's company and spec, so that’s good enough for us.

Expect crisp high-end sparkle from the Wolfgang pickups – which are body-mounted. Coupled with an oil finish neck this should, at least in theory, improve tone and sustain, though with a poly-finished body you may not notice. Still, if glossy necks feel sticky, the oil finish may be right up your street.

With a decent spec and Sterling’s usual reliable build quality, there’s little to dislike on this low budget version of country great Albert Lee’s Ernie Ball Music Man signature. If there’s one gripe to level at the AL40, it’s the company’s decision to employ twin-humbuckers instead of the three single coils found on Albert’s flagship Ernie Ball guitar.

However, it’s only really a problem if you’re dead set on a pure authentic Albert vibe, because, in fact, this is potentially a versatile workhorse. The five-way selector splits the pickups for single-coil-esque tones, allowing you to play bright, snappy lines with the bridge humbucker and Strat-like sounds with the ‘in between’ positions.

Built with aspiring shredders and metallers in mind

Jackson’s wallet-friendly version of Gus G’s signature axe is clearly designed to shred, with an impressive feature set at this price range.

A graphite reinforced neck with compound radius fretboard offers serious bang for your buck in terms of stability and playability, and top fret access is superb. Of course, if you desire a whammy bar you’ll have to look elsewhere – Gus doesn’t like them. Still, the benefit of a fixed bridge is steadier tuning and more accurately pitched string bends.

There are no surprises with the dual-humbucker arrangement. A three-way selector switches between bridge, bridge/neck, and neck pickups. With no coil splitting option it’s ’buckers all the way. Exactly what we’d expect for a guitar designed to riff hard!

A Telecaster for metal? Well, if you’re Jim Root, yes! It’s one of his go to guitars. And with the Slipknot man’s signature Fender model clocking in at £1,000+, this Squier makes for an attractive budget alternative.

Matching the full fat Fender, there’s a hefty mahogany body, 22-fret 305 mm radius fingerboard and black hardware including a hardtail bridge. Don’t be fooled by the Squier’s pickup covers, though. Despite the heavy metal looks these are passive pickups – as opposed to the active EMG-equipped Fender. Still, when we reviewed Jim’s Squier way back in 2012, we were impressed with its tonal versatility. Perhaps not an all-rounder, but more than a mere metal machine.

As a longtime ESP/LTD endorsee, Kirk Hammett has a raft of signature models with the company and the KH-202 represents the most affordable entry point. By and large you’ll be getting a similar spec to LTD’s next-model-up KH-602 – the 202 features the same neck profile, frets, fretboard radius, those cool skull and crossbones inlays and general styling.

Compromises are made on materials and hardware though. Along with a Floyd Rose Special trem, you’ll have to be content with passive pickups instead of the 602’s active system. That said, it is possible to upgrade to actives without the need for expert routing skills – a battery can, in theory, fit in the electronics cavity.

An offset body shape for offbeat players? We’d certainly say so! It may have been around since 2011, but the alt-rock legend’s signature Squier benefits from a spec suitable for any Jazzmaster.

Most important of these is the Adjusto-Matic bridge – a handy mod that increases stability during trem use compared to a standard JM bridge. Combined with the Jazzmaster’s traditional single coil pickups and circuitry, which, though a little kooky, allow for easy switching between high- and low-gain tones (as well as a standard three-way selector), the Mascis model has all a Jazzmaster fan could wish for.

That said, Squier’s cheaper Classic Vibe ‘60s Jazzmaster might be preferable if you’re prepared to forego the Adjusto-Matic bridge and the Mascis name on the headstock. The choice is yours.

Another cheap signature Telecaster, this time from country-metal ace John 5

Yet another Squier on our best budget signature guitars list, and our second Telecaster, this model from country-shred specialist John 5 features a double-bound alder body available in two colour schemes: black with chrome hardware or Frost Gold with gold hardware. The looks are striking thanks to those mirror finish pickguards.

Like the Jim Root model, the J5 Tele features twin humbuckers each with their own volume knobs, perfect for rapid killswitching – just turn down the volume on the neck pickup and toggle rapidly from bridge to neck. Or, just like the Mascis Jazzmaster, you can set one pickup to a lower volume to switch between high- and low-gain sounds with ease.

An ideal package for the beginner guitarist who wants to rock

As perhaps the ultimate Les Paul player, Slash is rarely seen playing anything other than Gibson’s classic singlecut. And, though it’d be unfair to compare this affordable Epiphone to more expensive models branded with the G n’ R man’s name, it’s fair to say you get a fair bit of guitar for your money.

A gigbag, strap, cable and picks are all included in a sub-£200 package. There’s a bundle available including Epiphone’s Snakepit-15 amp too – for a little more of your hard-earned, of course. Simple volume/tone controls and a built-in tuner make this a decent guitar for beginners looking for weighty humbucker tones. And with that flame maple top it’s quite the looker too!