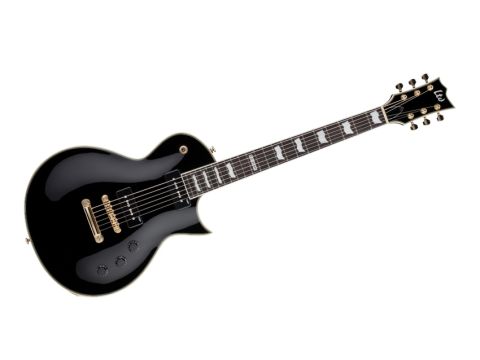 For jazzers or punks looking for a bit of class, this beast is the business.

No prizes for guessing what guitar the LTD EC-256P is based on: this slice of rock is clearly 'inspired by' the good ol' Gibson Les Paul.

There's the familiar singlecut body, tweaked just enough to keep the Nashville-based firm's lawyers at bay. There's the black finish with gold hardware, to make it look, in Mr Paul's own words, "classy - like a tuxedo". We're also told to expect a Blighty-exclusive version in Pearl White with gold hardware later this year.

"The soapbar pickups in this guitar push your amp to a raw, raucous sound that punks should lap up."

The only thing that LTD has got wrong is the choice of pickups. Surely a singlecut rock machine needs humbuckers?

Err, no, actually. For the first five years of its production, the Les Paul came loaded with P90s instead of humbuckers. So what we have here is LTD's take on the early models of the Les Paul, with a few tweaks to bring it up to date.

The P90 is a simple design - it's more or less a fatter version of a Strat-style singlecoil. Because they're wider, P90s pick up a different range of frequencies, with a lot more middle to the tone.

Also, because they're fatter, they tend to have more wire wrapped around the magnets, so they produce a higher output, pushing your amp into overdrive more readily than a singlecoil.

The soapbar pickups in this guitar do just that, pushing your amp to a raw, raucous sound that punks should lap up. Turn the gain down and you get a clean tone that's smooth like dark chocolate mousse, all rich and silky.

Our only criticism here is that the neck pickup is a lot louder than the bridge unit, but Mr Screwdriver should be able to sort this out by lowering the pickup height.

Vintage P90s are notorious for the hum they produce, but these pickups are stacked, so there's a second coil underneath the main one (rather than side by side, as with a humbucker) to cancel the electrical noise. This shouldn't have a huge bearing on the sound, but it does massively reduce the risk of you piercing eardrums with feedback when you should be melting faces with your solos.

This is a lot of guitar for your money (shop around and you'll find it for a bargain £349). It's certainly heavy - that's the price you pay for solid all-mahogany construction - but LTD has added a contour at the back of the body to make it more comfortable against your ribcage (or beer belly) and another one behind the cutaway to aid upper fret access.

It also has a slightly thinner neck heel than a LP or a Strat, so it's easier to wrap your hand around it where the neck joins the body. The difference is millimetres, but the result is a guitar that you can chuck around and throw some shapes with.

It's not without its flaws, however. There are a few marks on our example, and one or two of the fret ends are a bit sharp, so try before you buy. And if you're after a lead tone to cut through a bass player and a rhythm guitarist, look elsewhere.