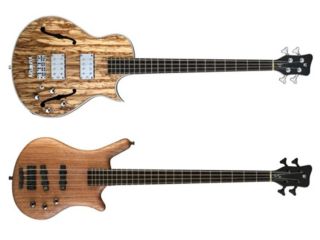 Today much-lauded German bass maker Warwick has announced two new models, one of which we got our first glimpse of at NAMM in January. Check out the press release below for full details.

PRESS RELEASE: Warwick Basses' long-standing reputation for innovation of musical excellence continues to grow with this year's launch of the Starbass II Single Cut and the upgraded Thumb Bolt On Bubinga.

The new designs are proof of their unwavering triumphs in consistently producing groundbreaking and quality instruments.

Introducing the Starbass II Single Cut Special Tigerwood. Made of a unique wood grown from the Etimoe species, Special Tigerwood is a growth defect that gives the unrivalled instrument a one-of-a-kind texture. The new model is built from red-brown heartwood with dark green veins running through it.

This eye-catching and tonally exquisite wood is extremely limited; in fact so rare it is never to be restocked. The Starbass II Single Cut will also be made from Flamed Maple.

"We take pride in our meticulous attention to detail," says Warwick's Vice President, US, Deborah Malave. "The striking wood selection fused with the vintage look, and the modern features create a one-of-a-kind instrument."

The hollow body bass model comes loaded with MEC Passive humbuckers instead of the single coils used on the Starbass II. Whether in Flamed Maple or with the look and sound of the Special Tigerwood, this edition will be one of Warwick's most sought after instruments.

How do you improve on the most popular bass and work of art in Warwick's 28-year history? Rather than try, Warwick has designed an alternative version of the Thumb Bolt-On, replacing the Ovangkol wood body with the beauty of Bubinga.

Thanks to Warwick this tight-grained, bold tonal wood, once ignored by luthiers, is now getting the justice it deserves.

Known for its distinguished and full-bodied sound, the Thumb's quintessential design has become a symbol of the company's celebrated craftsmanship. For the deepest growl, Warwick fashioned a Ovangkol neck to compliment the body. The guitar is bolstered by MEC's Active J/J pickups so every exquisite tone is channelled through your amplifier.

Now, with the look, feel and sound of the rich Bubinga wood, the Thumb's legacy is reborn and its name continues to resonate around the world, reaffirming that drastic design changes can't compete with the sound of wood.

"While the new version is closer to its big brother, it offers its own distinct sound," affirms Deborah Malave.