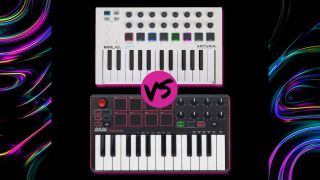 If you’re someone who likes to make music on the move, you’ll definitely benefit from a MIDI keyboard controller that’s small and lightweight enough to carry around with you on your travels, but which still retains enough features and functions to do everything you need.

At the top of the bestseller list in this category you’ll find two tiny but mighty contenders – the Akai MPK Mini Mk2 and Arturia’s MiniLab MkII, both of which are now in their second generation. But which is best? The answer will depend largely on your needs as a user, so read on for a direct comparison to help you choose.

Specs at a glance

Controller-wise, both keyboards offer the same amount of drum pads – eight in all, assignable in two banks for a total of sixteen – but in different layouts. The MiniLab lays all eight pads out in a single row, while the MPK prefers a 4 x 2 layout. This layout allows the pads on the MPK to be larger than those offered by the MiniLab, despite the MPK’s smaller overall footprint. The pads on both machines are illuminated, and both pressure and velocity-sensitive, but Akai has a serious pedigree when it comes to pads, and these examples, derived from the famous MPC product family, offer a greater degree of sensitivity, giving the MPK the edge in this regard.

Elsewhere, the MPK features a built-in arpeggiator with adjustable resolution, range and modes, plus an MPC-style Note Repeat function for hi-hats or fills and a Full Level button to disable velocity sensitivity, augmenting the function of the pads, another nod back to the original MPC drum machines that veteran beat makers will appreciate.

You’ll also find dedicated buttons to switch between drum pad banks A and B, and select whether the pads transmit program change messages or MIDI cc’s in addition to their regular function as drum pads. The MiniLab meanwhile has a similar button to shift pad banks and both keyboards sport dedicated octave shift up/down buttons.

Although both controllers sport the same number of keys – 25 in total, spanning a two-octave range from C to C – the keys on the Arturia are physically larger than those on the Akai, despite both devices falling into the same ‘mini-key’ category. This of course has an impact on the unit’s physical size – the MPK Mini will happily slot into a 13” laptop bag, whereas you might struggle to achieve this with the MiniLab, which is a full 40mm deeper from front to back.

With the two units side by side, there’s a marked difference in apparent build quality. Like most Arturia kit, the MiniLab II is built like a tank with a metal-bottomed enclosure that feels really solid, while the MPK Mini feels a little lightweight and plasticky by comparison. However, this lighter weight does contribute significantly, along with the unit’s size, to the MPK’s greater portability.

Either keyboard comes in a choice of colours – you can opt for the MiniLab Mk2 in either black or white finish with Arturia’s signature wood-effect side panels, while the MPK Mini Mk2 can be had in black and red with normal keys, white with reversed colour keys or even a striking, limited edition red version with reversed red and black keys.

Despite the price bracket, both keyboards are perfectly playable, with lightly-sprung, synth action key beds. Although the MPK’s smaller keys didn’t cause us any problems at all, and in fact may have actually been a bonus when it comes to playing fast runs and arpeggios, the MiniLab’s larger keys seem more suited to our hand size and have the edge when it came to a more high-quality feel overall.

Expressive control is handled on the Arturia by a pair of touch strips for pitch bend and modulation, replacing the physical pitch and mod wheels often found on regular synths. These never feel quite as good as the physical thing to us, although one advantage is that you can touch a finger anywhere on a strip and that value will be applied instantly; useful in some cases for applying momentary modulation effects.

Akai meanwhile takes a different approach with a four-way mini joystick control for both pitch and modulation. Pitch bending is undertaken by moving the joystick horizontally, with modulation introduced with vertical movement. This takes some getting used to and, although it does work quite well, the joystick itself is quite fragile and could be prone to breakage if you’re continually stuffing your MPK in a bag.

Both excellent contenders, either of which we’d highly recommend, but which unit comes out on top between these two ultimately depends on what you need from your MIDI controller. The main reason why the Akai MPK Mini has been so popular for so long is because it offers an unparalleled amount of control in such a tiny, portable package, an appeal that’s no less relevant in the current climate.

For mobile music makers, then, we’d say that the MPK remains an unassailable choice. However, if portability isn’t your main consideration, the Arturia MiniLab MkII is more solidly built and more than gives the MPK Mini a run for its money when it comes to looks, playability, feature set and value. If you don’t mind the larger size and weight and are just after a feature-laden controller with a small footprint for a specific spot in your studio, we’d go for the MiniLab.