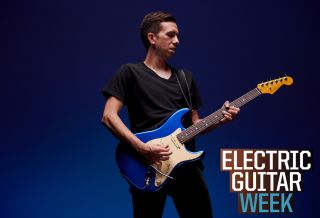 "So it’s just shifting the accent along the 16th-note grid to get the execution and the mind focus of it.”

For Cory’s downbeat accenting exercise pick ‘down up down up’ and keep all the notes shown with ‘X’s muted out - only the downbeats should ring out.

Accents on the ‘e’

Moving the accent along the grid, now you’ll be sounding the second note out of every four - just as Cory describes. Count ‘1 e & a’ to keep time and sound the ‘e’s.

Play a run of straight 16th notes, this time with the accent on the third note out of every four. Using ‘down up’ style picking, this should be a downstroke.

Accents on the ‘a’

Hopefully you saw this coming! The fourth stage of Cory’s funk picking exercise has the accent on the fourth note of each grouping. It should be an upstroke.

Two beats on each pattern

This is where things get tough, so make sure you’ve practised each element before you get started! As Cory describes, he plays two beats of downbeat accents, then two beats on the ‘e’, two beats on ‘&’ and two beats on ‘a’. The last note of bar 2 and the first note of bar 1 are both accented - so you get two accents in a row on the repeat.

One beat on each pattern

Finally, this is the hardest part of Cory’s funk workout. You’ll be moving the accent every beat, so there’s not much time to get a feel for each four-note group. Make sure to practise slowly and keep in mind whether you should be accenting a downstroke or an upstroke.