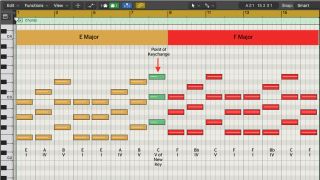 Key changes - or ‘modulations’, to give them their proper, music theory-professor name - may have become a bit of a pop cliché (picture Westlife stepping off their stools), but knowing how to craft a smooth key change is a useful songwriting skill.

There are various ways to ‘modulate’ to a different key, but one of the easiest is via chromatic modulation - taking a chord in one key and shifting it up one semitone to a chord that’s in the new key.

In this example, a I - IV - V progression in E major modulates to the key of F major by way of the V chord - B major - shifting chromatically up by one semitone to C major, which becomes the V chord in the new key of F major.

Parallel modulations shift between major and minor keys that share the same root note - C major and C minor, for example. This is often done via the dominant V chord common to both keys, which in this case would be G major.

Another way to change key, using a pivot chord means finding a diatonic chord common to the current and new key, then using that chord to bridge the gap.

Step 1: Here we have a chord progression of Eb - Cm - Gm. This is represented in the key of G minor as a VI - iv - i. Let’s say we want to shift to the A minor key after eight bars. Our first job is to figure out which chords are diatonic to both keys...

Step 3: Let’s bring about the change of key by inserting a D minor chord at the end of our G minor section, and continuing the same progression in the new key of Am. The same VI - iv - i progression in this key now produces the chords F - Dm - Am.