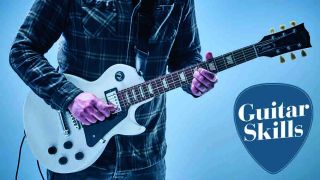 Dave Celentano is a guitarist and instructor for Guitartricks.com

There’s a few schools of thought regarding writing and crafting a lead guitar solo. The first is taking a more free-form approach by noodling around and improvising until something that sounds good is discovered.

Another approach is systematic and based on the music theory side where you’ll discover the important landing notes over chord progression. I use both when composing a solo, but first I start by jamming over a looped recording of the chord change, focusing on writing a super simple melody that works over the chords.

The Eagles ‘Hotel California’ is a great illustration of this in action, where the solo follows the chord progression explicitly by landing on key chord tones for most sustaining notes during the solo.

Before launching into a solo though we must know the chords we’ll be playing over and what key it’s in. This will determine the proper scale to use. This lesson uses a simple and common two-chord vamp: ‘Am – D’. Now let’s discover the chord tones and key. The three notes of ‘Am’ are ‘A, C, E’, and ‘D’ are ‘D, F#, and A’.

Next, determine the key (almost always the same as the first chord) which is A minor and the most appropriate scale to use for soloing over this progression. Based on the two chords the optimum scale is A Dorian = A, B, C, D, E, F#, and G (see Example 1). It’s important to find the correct scale that houses every note from both chords. Notice they all exist in A Dorian.

Using the tempo of 65 BPM, record yourself playing the chord change several times or loop it, then play the simple melody over it and notice how good it sounds. This is a great time to get acquainted with the notes on the fretboard in the fifth position, something every budding guitarist should strive for.

Now starts the fun part where we’ll develop the melody by adding other scale notes, hammer-ons, slides, and string bends and begin turning it into a legitimate guitar solo.

Example 3: Elaborating on the melody

Example 3 embellishes with two neighboring scale notes (from A Dorian) just before each melody note. The second half reaches a few melody notes with string bends.

Example 4: Elaborating on the melody

Example 4 shows further development of the solo using additional notes, double-stops, legato, and faster licks while keeping the melody in focus. The melody must always be present, so refrain from veering off track and noodling.

Feel free to change things up by experimenting with other scale notes and techniques to enrich the simple melody. It gets easier the more you work with this method.

After successfully creating a melodic and catchy solo, reward yourself by tearing it up with your own improvisation.

My challenge for you is to come up with a simple melody and melodic solo of your own using the same chord progression and scale. What are you waiting for? Get those fingers flying!

Dave Celentano is a guitarist and instructor for Guitartricks.com