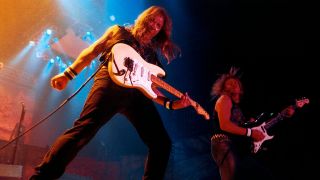 “Twin lead, then... I guess that means two guitars, right?”

That’s right. However, though the history of rock is littered with two- and even three-guitar bands, twin lead generally refers to a particular sound where two guitarists play in harmony with each other.

“That sounds complicated. Is it hard?”

Like most styles of music, some of it is hard and some is easy so don’t worry about that - we’ll help you get started. And our audio tracks mean you won’t need a second guitarist to jam with while you learn.

“How does ‘playing in harmony’ work then?”

It’s fairly simple. One guitarist plays a lick from a particular scale - say, the major or natural minor scale (don’t worry about the names!); a second guitarist plays essentially the same lick, mirroring the rhythm and timing of guitar 1, but using different notes from the same scale.

“Okay. One scale, two guitars. Simple enough. But which notes should I play?”

The easiest way to start is using ‘3rds’. This is where two notes are three steps apart in the scale - hence they’re called 3rds. Take a look at the boxout on the right to see how it all works.

Yes! The notes of F major are: F G A Bb C D E F and A are ‘diatonic 3rds’ because they’re spread over three consecutive notes; as are G and Bb, A and C, and so on. Diatonic just means they come from the same key.

“This seems like a lot of heavy theory. Do I really need to know all this?”

A little knowledge of music theory will take you a long way here. As long as you understand how to play three steps apart but stay within a scale you’ll get the hang of things.

“Do lots of bands play this way?”

“Shall we play some music?”

Definitely! Take a look at our two tab examples below. Played on their own, each line is a simple melody. Play them together though and you’ll see how twin lead harmonies are put together. Remember, you'll be using the same rhythm, timing and key signature, but different notes from the scale.

How to use 3rds for traditional twin lead rock harmonies

Start by playing these notes from the F major scale. Start on the lowest note (F) and play in order (G, A and so on) up to the highest one.

Now play this section of the same scale. It’s still F major, but you start on the third note of the scale - an A note.

This is a simple hard rock lick played with an overdriven bridge humbucker tone. Notice where the bends and vibrato are - you’ll be matching them in the next lick.

Switching to a warmer neck humbucker, this lick follows the same rhythm as before but every note is a 3rd higher. Try to sync your vibrato with guitar 1.