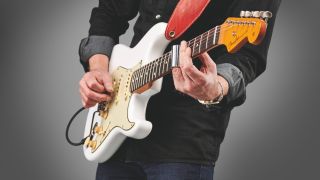 In this lesson we will gain some fundamental skills with the slide. Start by finding a slide that fits your finger comfortably; not too tight that it restricts movement, but not too loose either as this will be difficult to control. Place the slide on your second, third or fourth finger and use your remaining fingers to mute the strings on the nut side of the hand. This will prevent any unwanted string resonance, particularly on acoustic guitar.

The purpose of the slide is to be able to glissando from note to note, effectively making the guitar into a fretless instrument. We can of course use the frets as a guide and when playing a note, you should position the slide directly over the fret-wire to ensure good intonation.

The main problem is that the slide is straight, so playing chords can be limited. A lot of slide guitar is played in open tuning to overcome this, but it is a useful skill to play in standard tuning (like Jeff Beck or Brett Garsed), so you won’t need to retune.

Our first example is based in the Minor Pentatonic scale along one string. This is a chance for you to practise keeping the slide directly in line with each fret in order to play in tune. Since this is a very familiar scale, your ear should immediately tell you if you are in tune, or sharp or flat.

Example 2 is based in the same scale, but this time we will add some character using the vibrato technique. As before, position your slide over the fret-wire so the note sounds in tune, then repeatedly slide above and below the centre of the note to create a smooth sounding and in-tune vibrato.

The next skill is using the slide to play melodies across multiple strings while only letting one note ring out at a time. Players like Sonny Landreth and Derek Trucks use this technique to great effect. To do this, play the notes in a fingerstyle fashion and use the fingers of your picking hand to mute the unused strings as well as pluck the one you want to hear.

Example 4 uses double-stop major 3rds on the second and third strings. You might notice that the major 3rd interval sounds slightly sharp. This is a natural result of the straight frets on the guitar being a compromise of perfect intonation. With the slide we can compensate for this as essentially we are playing a fretless instrument. Try positioning the slide at a slight angle so the notes on the second string are slightly behind the fret. Use your ear to guide how much angle is needed.

Finally in Example 5 we put everything together use 5th position Minor Pentatonic scale. This is a useful shape for standard tuned slide as there are so many 4th double- stops throughout the shape. And you can see why players like Jeff Beck like this approach.

Play through each example carefully, focusing on playing in tune, then have a go at playing the licks over the backing tracks.

Try playing this ascending scale by fretting with your fingers first to make sure your ear is familiar with the notes. Next, place the slide on your second, third or fourth finger (each has its advantages and different players opt for different fingers), and play the notes keeping the slide directly over the fret-wire.

Ascend the scale just like in Example 1 and add vibrato by moving the slide above and below the fret, making sure there's enough pressure to maintain the note, but not enough to actually fret it. The amount you move either side of the note is down to taste, but about a semitone is typical.

Use the slide to play this E Major triad (E-G#-B) arpeggio sliding between the notes that are two-notes per-string. Use the fingers of your picking hand to pluck the strings as you go, while using your remaining fingers to keep the other five strings muted. The goal is to only hear one note at a time.

Here we are using the same lick in two different positions to outline a D to G progression. If you find these major 3rd double-stops sound a little out of tune, play them with a very slight angle on the slide in order to flatten the second-string note ever so slightly.

Here we are playing the same lick in two different positions to outline a I-IV, or B7-E7 progression. You could use this same idea to add a V chord (F#) and play the lick over a 12 bar blues. Then of course you could move away from this lick to create ideas of your own based around it, or completely different.