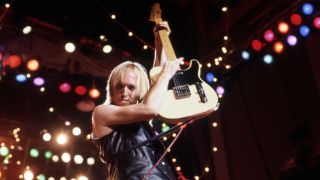 Any guitarist who amplifies his or her instrument must also set the proper amplification level at each point in the signal path. This process is called gain staging (or gain structuring). Essentially, you are setting the level of amplification (gain) at every stage in your signal chain. This will give you the volume and tone you desire from your speakers, whether onstage or in the studio.

That’s because proper gain staging minimizes any unwanted noise, such as hiss or hum, and maximizes the signal level (your guitar tone). Even if you plug your guitar directly into an amp head or combo, there are gain stage considerations.

Although there are plenty of articles about gain staging already, most of them are directed toward live sound and recording engineers. Guitarists, however, deal with a different set of issues.

For example, gain staging actually begins on the guitar itself, by setting the optimum distance between your instrument’s pickups and strings. If they are too far apart from each other, the sound will be thin and the power of the signal at this first stage will be weak, which can introduce hum and/or hiss when you turn up the amplifier to compensate. At the other extreme, raising the pickups too high will cause their magnets to pull on the strings, which reduces sustain and may create a muddy tone, as well.

Next is your pedalboard. Most guitar pedals are optimized for every type of pickup, but some of the more sensitive effects have a switch that makes them work equally well with either passive or active pickups.

On overdrive, distortion, or fuzz pedals, you are dealing with at least two stages of gain: One is typically called Drive, Distortion, or Gain; the other is an output stage that is sometimes called Level or Volume. You should take into consideration that single-coil and humbucker pickups each drive the Gain section of a distortion pedal differently. The Volume stage of the pedal must be adjusted to properly push any pedals, amplifiers, audio interfaces, or software down the chain. This is especially crucial when using one drive pedal to push another, as the output level of the first pedal in the chain will help determine the distortion level of the second. Modulation and delay pedals are not usually sensitive to gain staging, but some pedals feature an LED that turns red when they are being overloaded.

Stacked overdrives notwithstanding, when playing through pedals into an amplifier, gain staging is a relatively simple affair. However, when digital processing is involved, a few more stages are added to the equation. First, you will be going through an audio interface to convert analogue audio to a digital signal. Overloading the interface will introduce digital distortion, a sound normally to be avoided. A level that is too low, on the other hand, results in a situation that is similar to having your pickups too far from the strings; a weak signal that allows noise from the interface’s preamps to come to the foreground.

Another issue that will result from poor gain staging is inaccurate sounds from any amplifier-or pedal-modelling software you use. Amp and pedal models are designed to respond to an input signal that mimics plugging a guitar into their front end. If the signal they see is too weak, the level of realism falls off rapidly: Crunchy amp presets don’t crunch and distortion pedals don’t distort properly. In addition to finding the proper levels for the analogue-to-digital converter, amp modellers, other plug-ins, and iPad apps will have their own input level adjustments.

Finding the right gain level at each stage in your signal chain requires trial and error. But remember that, though meters and overload lights can be a helpful place to start, your ears should be the final judge as to whether all the gain stages are working together in perfect harmony.