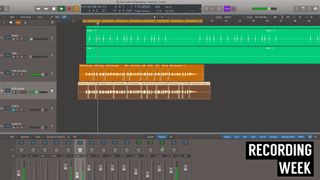 RECORDING WEEK: ‘Double tracking’ (or ‘triple tracking’, and so on) is an established production technique that dates back to the early days of three- and four-track recording, though it’s considerably easier these days using the cut and paste capabilities of DAWs. It simply involves recording the same part multiple times, then playing them all back together – the natural differences between each take add up to create a big, lush sound.

First, you need to establish a reference. Typically, double or triple tracks work to support an existing track, so before you try to add layers, make sure your core track is good enough to support them. Second, when adding double or triple tracks, have the main track up as a reference, so that the musician can perform to it and check that it works. You’ll probably need to compile and edit the layers, but as they’re being used in a supporting role, they don’t need to be as accurate as the main track in terms of pitch and timing. You can use layers in mono or spread them in stereo.

Read on to learn how to create this effect.

• Recording Week is brought to you in association with Universal Audio

Step 1: The key to a decent double or triple track is having a good original core take. Let’s assume that yours has been recorded, compiled and edited brilliantly (of course it has!), so that it provides a perfectly in-time and in-tune reference.

Step 3: You may need to do a number of takes and compile your double track. However, some looseness in pitch and timing adds richness. It can be tempting to use automatic tuning plugins on your double and triple tracks, but be careful if you do, as the result can sound artificial.