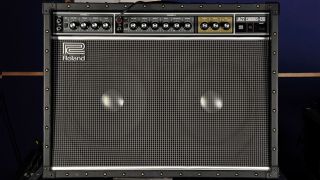 We tend to think of valves when the phrase ‘classic amp’ is mentioned, however, there’s one classic guitar amp that’s been around since 1975 that doesn’t have a single valve inside: Roland’s mighty JC-120 Jazz Chorus combo.

The JC-120 is totally solid-state and while it has a somewhat fizzy, built-in overdrive/distortion, it’s the clean sounds and the integral Boss Chorus Ensemble that have endeared it to many guitar players.

The Jazz Chorus was the first product to use the original Chorus Ensemble, predating the Boss CE-1 by about one year. Channel switching didn’t exist on most mainstream amps in the mid 1970s and many pro guitarists used two different amplifi ers - one for clean rhythm sounds and one for overdriven leads.

The JC-120’s rugged, solid-state reliability overcame many guitarists’ misgivings about using transistors, and with an instantly recognisable appearance Roland’s big combo began to replace its main competitor on many professional stages. Listen to any rock album from the mid-1970s onwards and if you come across a big, clean chorused rhythm sound, it was probably produced by a JC-120.

The JC-120’s chorus section feeds two separate 60-watt power amps, each driving a specially-designed Roland loudspeaker. With a modulated signal on one side and a dry signal on the other, the chorus effect is created in the air as the two signals combine, producing a swirling three-dimensional soundscape that many guitarists find pleasingly addictive.

The list of users is practically endless - from Def Leppard and Metallica to Andy Summers and Pat Metheny, the JC-120 is still the ultimate clean sound for many pro players, as well as becoming the default guitar amp for practically all African and Caribbean guitar-based music.

Much of the JC-120’s sound and reputation for reliability is down to the specially–designed Roland loudspeakers with their distinctive metal dust caps. Lots of guitarists experiment with substitutions, but there’s no doubt that the original drivers are a perfect match for the amp.

The JC-120’s chorus effect is joined by an equally good vibrato; there’s also a decent spring reverb effect on channel 2, with a mono out/stereo return effects loop on modern versions, which works on channel 2 only.

Its distinctive riveted edge trims helps reinforce the amp’s low frequencies as well as providing the right amount of separation between the speakers for the optimum chorus effect.

Get the tone #1: Hard rockin’ rhythm

On any big metal album track from the late 70s, the lush chorus sounds are usually coming from a JC-120. Try adding a little compression and some hall reverb low down in the mix to accentuate the spacious swirly effect. For the chorus, you need a stereo output with dry signal on one side and wet modulated only signal on the other.

Get the tone #2: Metheny haze

Pat Metheny’s signature electric tone is based on a warm chorus, with a subtle delay and swirling reverb. This sound – or something similar to it – has become a staple tone for many jazz/fusion players, such as Miles Davis and Billy Cobham collaborator Mike Stern and Mahavishnu Orchestra’s JohnMcLaughlin.

The JC-120 is the sound of nearly all African and Caribbean-based guitar music. It’s so universally used in this genre that if you check out most reggae and ska bands, you’ll hear a tight guitar sound with a touch of short room reverb, often with a hint of chorus but sometimes played dry.

Find the JC-120 in your amp or software