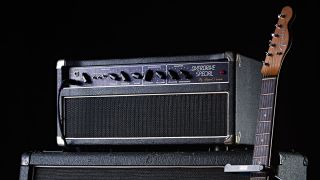 The Dumble Overdrive Special refers to a specialised range of guitar amplifiers built by Alexander Dumble during the 1970s and early 80s.

Based in Santa Cruz, California, Dumble’s origins were repairing guitar amps for the local music community, which led to his first amp design-related work for Mosrite. Like other contemporary LA amp hot-rodders, including Randall Smith and Paul Rivera, Dumble pursued his own high-gain ideas and built amps for customers on a bespoke basis.

There are several different types of Dumble amplifier but the most famous is the Overdrive Special, which features a clean channel that cascades into a foot switchable overdrive circuit with a passive EQ and pre-gain EQ switches that pre-set the EQ for different styles.

Dumble did not expand his operation and self-built all his amps from scratch, resulting in long lead times and alleged eccentric order terms and conditions. All Dumble amplifiers were built to suit the requirements of the original customer and all are different to a greater or lesser extent.

Their use by some of the most respected players in LA, including Larry Carlton, Robben Ford, Carlos Santana has added to the Dumble legend, while their rarity (it’s estimated there are fewer than 300 real ODS’s) has driven up used values to extreme levels, typically £100K-£150K.

Most Dumbles are based on Fender circuits and Fender-type amp models are generally closest to the Dumble sounds, which are typified as very open, almost hi-fi cleans with a violin-ish smooth overdrive distortion.

Most Dumbles have a pair of inputs labelled ‘FET’ and ‘normal’. The FET circuit is intended for guitars with piezo pickups and produces a very clean sound, while the normal input is closer to a traditional Fender-style first gain stage. Typical switch arrangements are toggles for bright, deep and rock/jazz.

Key to the Dumble sound is the way the clean preamp cascades into the overdrive section. With overdrive engaged, the clean volume control becomes an extra gain control, driving the overdrive ratio, while the level sets the comparative volume difference between overdrive and clean. This arrangement is not easy to set up and requires a degree of compromise to get the best overall clean/ overdrive combination.

The Overdrive Specials featured global master volume and presence controls. Most Dumble ODS’s were made using EL34 output valves, but there are variations, for example Larry Carlton owns one that runs on 6V6’s for a lower output, intended for smaller venues.

Get the Tone #1: crossing over the Ford

Robben Ford uses many different guitars and over the years his sounds have changed quite a lot, however, he continues to be strongly associated with his Dumble. According to legend, Dumble’s ideas for the ODS came from hearing Ford play. Ford uses the Dumble as much for its expansive cleans as the drive, and controls his gain and attack from a volume pedal.

Get the Tone #2: reelin’ in the clean tones

LA session man extraordinaire and Steely Dan collaborator, Larry Carlton’s tone has - like Robben Ford’s - also changed considerably over the years; his contemporary sound is much cleaner and using his considerable taste, Larry Carlton also makes full use of the Dumble’s extensive headroom for control over dynamics, attack and sustain.

Get the Tone #3: stand and deliver

During the 1980s, Dumbles in the hands of stars like Steve Farris (Mr Mister) came to typify LA AOR-tones and the fat, violin-smooth distortion is a big part of the Dumble mystique. Unsurprisingly, given second-hand Dumble values, there are many overdrive pedals that can be used to approximate the Dumble tone. Try using a touch of chorus for that classic 80s vibe.