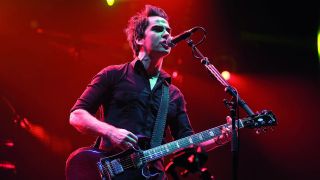 Guitar skills: There are two main types of sus (or ‘suspended’) chord: the sus2 and the sus4. Each of these is a variation on a basic major chord – so, where a major chord uses the first, third and fifth notes of the major scale, a sus chord replaces the third with either the second (sus2) or fourth (sus4) notes.

You know them from:

When to use them:

2. Emphasise a chord change
A simple chord change such as A to E can be enhanced with a sus4 chord – simply play A-Esus4-E. It’s used especially in hymns, but also extensively throughout rock, pop and folk.

Most of these shapes are based on the open E, A and D chords you probably already know. In each case, play the major chord and notice how the sus chords are a simple finger movement away. Esus2 and Bsus4 are based on standard ‘A shape’ and ‘E shape’ barre chords.

The mix of clean and crunchy tones here has an unsettled feel due to using only sus chords. Change the sus2 chords to A and D for a more settled sound.

Exercise 2: Getting It Sussed

Again, we’re using the unresolved sound of the sus chord, this time in an ambient progressive line. Keep your pick attack uniform so notes are the same volume.