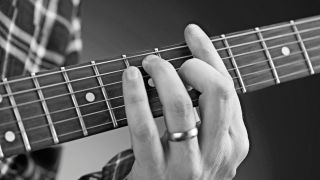 There are two basic types of chords: major and minor. In their most simple form they have three notes called a triad. Because we’re lucky enough to have six strings on our guitars these three notes are often repeated in different registers to give us a nice full sound.

The thing is, these two chords types are black and white. A major chord sounds happy, while a minor chord sounds sad. So what do you do when you want different shades in your music? Well, you insert extra notes to these basic chords. The major 7th chord is produced by adding a fourth note to a three-note major chord. Let’s look at how you do this.

This is the C major scale. As you can see there are seven notes with the first note (called the root note) repeated at the end in a higher register.

A major chord is constructed by using the 1st, 3rd and 5th notes of this scale. Like the scale the root note is often repeated in a higher register.

The tab shows how the C major chord is constructed from the C major scale. Strum the chord a few times and listen to its bright, happy sound.

The C major 7th chord is easy enough to play so focus your attention on learning how it sounds. Play it back to back with the ‘regular’ C major chord and listen to the difference.

This progression moves between the major and major 7th chords with the same root note so you can clearly hear their sound in a musical context.

As you change to the major 7th chord make sure the open string rings clearly and isn’t muted by any of your fingers. Check this by playing each string individually.