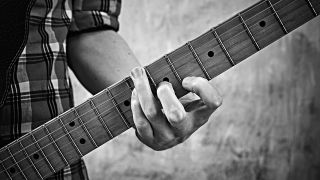 Over the last two months we’ve been looking at major and minor 7th chords, so now we move on to the tense, bluesy-sounding ‘dominant’ style 7th.

Like major 7th chords, dominant 7ths are a major chord with an extra note added. And, as with all chords, we’ll be using formulas to help you remember how each one is built.

A dominant 7th chord (1 3 5 b7) is a major chord with a flattened 7th. This vital note is one note lower than the seventh note of the major scale (spelled out below). It doesn’t sound much, but it makes a lot of diff erence to the sound. So, you can easily see that an A7 chord uses the notes: A C# E G.

The tab shows how the A7 chord is constructed using the A major scale as a reference. Strum the chord a few times and listen to its strong, but tense sound.

It’s just as important to learn the way chords sound as it is to learn the theory behind them. The major, major 7th and dominant 7th chords are very similar chords when played in an open position, but each one has a distinct sound that you should become familiar with.

This example moves between major, major 7th and dominant 7th chords so that you can hear the difference between them. Take the time to play each chord slowly and absorb the sound.

Many blues tracks use dominant 7ths exclusively - this bluesy example uses three so you can hear them in context. Really dig in on the palm-muted notes and then contrast them with a strong un-muted strum to nail the correct feel. It’s easy to choke the open strings in these voicings, so pick each note to check they are sounding correctly.