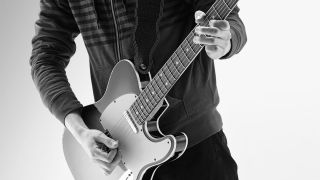 As we’ve said before, in recent issues, the easiest way to understand modes is to think of them as re-workings of the major scale, simply starting on a note that isn’t the root. The Aeolian mode is no different. Just start on the sixth note of the major scale and you’ll be playing this month’s mode.

Hopefully, for instance, you can see that C major (C D E F G A B) gives you A Aeolian (A B C D E F G). This mode is a special example because it actually has two names, due to also being known as the natural minor scale. The reason for this is that the Aeolian mode is the scale that minor keys use.

1. C major and A Aeolian scales

Despite using the same notes, the gap between the first and third notes in the Aeolian mode (A and C) is a minor 3rd (three semitones) compared to a major 3rd in the major scale (four semitones between C and E). The minor 6th and 7th intervals are also a semitone narrower, giving the mode its trademark moody sound.

Here we're playing C major and A Aeolian. The notes are the same, but listen out for a dark, moody sound in the Aeolian mode thanks to its minor intervals.

2. Chords in the Aeolian mode

These are some basic chords you can play using the notes of A Aeolian. Remember, because the two scales share the same notes, you’ll find the same chords in C major – just starting on C instead. Any progression of these chords with Am as its root can be described as an Aeolian piece of music.

This All Along The Watchtower style chord progression uses Am, G and F chords. Try experimenting by adding in other chords from A Aeolian, such as C or Em.

This lick uses the A Aeolian mode exclusively. Remember, the notes are the same as C major, but the Am chord feels like a natural resting place for the music and that’s why there’s an Aeolian sound. We’ve finished the lick on an A note to help bring it to a natural sounding conclusion.