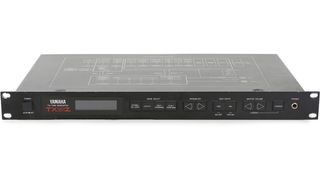 Few instruments could be said to have changed the music world as thoroughly and quickly as Yamaha’s DX7. Unleashed in 1983, this affordable, all-digital FM polysynth was primed to take over the stage and studio alike. Thanks to a burgeoning new wave scene’s addiction to all things electronic, and a glut of boring old analogue synths on the market - not to mention those mysterious ‘MIDI’ ports round back - the DX7 was a blockbuster success

Of course, nothing breeds success like success, and Yamaha were determined to ride the FM wave through the rest of the decade, releasing an endless stream of instruments cast in the DX7’s mould. A few, like the diminutive DX100, were cut-down, cut-priced options with fewer operators (Yamaha-speak for oscillators), less polyphony and less... well, everything.

Yet in 1987, with the new wave long since forsaken, Yamaha managed to give FM a shot in the arm with the 1U TX81Z and, to lesser success, it’s keyboard-equipped cousin, the DX11. These units were cheap yet powerful alternatives to the company’s second-gen flagship FM synths. They had better sound quality, and though they provided only four operators per patch, those operators differed from the big boys in that they offered a full eight waveforms rather than the lone sinusoidal of the eight-operator synths. This added sonic flexibility gave the TX81Z and DX11 the power to produce far more complex patches than previous four-operator Yamaha synths.

Polyphony was still limited to eight voices, but these super-charged four-operator FM synths were multitimbral, meaning that users could create fairly complex multi-part arrangements using either a hardware MIDI sequencer or one of the many software sequencers that were beginning to populate music store shelves. All eight patches could be stacked as a single, ridiculously complicated voice.

Other high-end features included both velocity and aftertouch sensitivity, as well as a bit of faux delay and reverb. These fine touches were wrapped around a by-then familiar FM synthesis architecture. It was still a strictly digital and non-subtractive affair – the idea of adding a filter to an FM signal path was still more than a decade away.

As with all of Yamaha’s original 80s FM jobs, there were a fixed number of possible FM routings (called ‘algorithms') in the TX81Z - eight of them, in this case, handily printed on a plastic card that pulled out from a recess in the bottom of the front panel. Less handy was a memory structure diagram, printed on the top of the unit’s case, where it would remain unseen by any user who slotted it into a rack!

The 128 preset patches did a fine job of showing off what the machine could do, even if some seem a bit cheesy by today’s standards. Still, many, such as the famed Lately Bass, became immediately recognisable classics thanks to the many dance producers who used the sound in the 90s.

Is the TX81Z relevant today? Maybe, if only because its so cheap to get hold of. However, the instrument’s sound has been handily replicated in virtual emulations - some of which are free.

Native Instruments’ FM8 is the successor to one of the first hardware emulations to make a splash, their FM7. Though it sports a six-operator architecture, it includes all of the waveforms of the TX and a lot more besides. Algorithms may be freely designed in a routing matrix, and the multi-stage envelopes are to die for.

FM synths have long been a favourite subject of freeware developers, and Dexed is one of the best we’ve ever seen. Free and open-source, it’s available to users of OS X, Windows and Linux computers. It’s so accurate that it can act as a remote editor for an actual DX7. It’s a straight DX7 clone, so more (and less) than a TX81Z.

Part of the free Classic Synths bundle, the Opfour is a direct copy of the Yamaha TX81Z for Ableton Live’s Max for Live users. A-bang on clone of the original, there are even some SysEx import/export options onboard. The sound is pure 80s FM, although thankfully the interface isn’t - it makes programming as easy as can be.