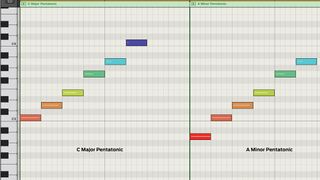 These incredibly useful five-note scales are heavily relied upon in all genres of music, but particularly pop. Because of their simplicity compared to a normal seven-note major or minor scale, they’re often used to introduce beginners to the world of improvisation.

The reason these scales work so well over many chord progressions is that they contain either chord tones found in major or minor triads, or common extensions. As a bluesy bonus, if you add a sharpened fourth to the minor pentatonic, you get the famous blues scale, which is perfect for riffing and soloing over almost anything.