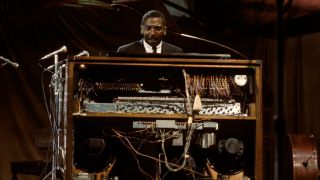 Before Jimmy Smith, the Hammond B-3 organ was primarily heard in churches, baseball stadiums, and skating rinks. Inspired by organist Wild Bill Davis and others, Smith spent the better part of 1953 “woodshedding” in a warehouse where he honed the sound that would come to define him. The topics explored here only scratch the surface of Smith’s playing, but they’re a great place to begin investigating why he was the first and is still the biggest reason anyone uses “jazz” and “organ” in the same sentence.

1. Bebop and Blues
Jimmy Smith famously incorporated both blues and bebop idioms into his melodic lines. In Ex. 1, the pickup, the first measure, and the third measure use all use scale degrees from the F Mixolydian scale, while the second measure takes notes from the blues scale. Smith interweaves these two sounds seamlessly.

2. Solo Development
Repetition is extremely effective in Smith’s improvisations. He usually starts with a simple idea, and then develops it. In Ex. 2, the initial statement in the first measure—three quarter notes from the blues scale—is embellished in the third measure. We see it again in different forms in measures 5 and 11. To practice, take a three- or four-note idea and, for example, add or subtract notes from the beginning, middle, or end of the phrase. Switch the note order and alter the rhythms.

3. The Big Voicing
The big band-style voicing in Ex. 3 typifies how Smith would have played an F13 chord: with the root on the bottom, a tritone interval marking the chord’s third and seventh in the middle register, and the color tones on top. In the treble staff, the notes actually form a G7 chord, which in the key of F translates to (in ascending order) the ninth, sharp 11th, 13th, and root.

4. Bass Lines
Although Smith would often play bass with the organ’s foot pedals on ballads, faster tempos involved him walking the bass with his left hand, as in Ex. 4. Smith pioneered tapping the pedals underneath his left-hand bass to create extra attack and drive on each quarter note. On a typical 12-bar blues, Smith’s bass lines often stayed in a one-octave range, forcing him to think about how many chord and non-chord tones would connect his chord changes. Practice this by setting a “target” note on the downbeat of each measure, then filling in the rest of the quarter notes with half steps, whole-steps, and other chord tones.

Ex. 5 shows how Smith might play a solo phrase on the upper manual, and then respond to it using a different sound on the lower one. Unlike a pianist, an organist uses the right hand to solo and comp, rapidly moving between upper and lower manuals, while the left hand is busy walking the bass line.

The Jimmy Smith Sound
“The Hammond sound most closely associated with Jimmy Smith is achieved by pulling the first three upper-manual drawbars out all the way, and adding third harmonic percussion set to fast decay,” says Emmet Cohen, a finalist in the 2011 Thelonious Monk Competition. Sometimes, Smith pushed the 5-1/3‘ drawbar in a couple of clicks, and sometimes he added vibrato/chorus at the C3 setting. He almost always kept the Leslie at slow speed.