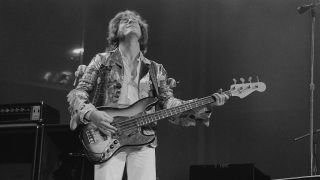 John Paul Jones is universally recognized as the bass player in legendary rock group Led Zeppelin, but he was responsible for many other duties as well, most notably for playing keyboards.

In fact, some of Led Zeppelin’s most identifiable and iconic moments were due to John Paul Jones’ inventive and eclectic keyboard parts. Here are five ways to get inside his many different keyboard styles.

Taking a cue from the soul, R&B, and funk bands of the day, John Paul Jones found a way to work funky Clav parts into the Zeppelin sound, infusing them with unabashed arena-rock flare. Ex. 1 is in the style of Jones’ Clav riff to “Trampled Under Foot.”

Ex. 2 is in the style of Jones’ intro to the song “No Quarter.” On record, Jones ran a Hohner Electra Piano (not to be confused with the RMI keyboard of the same name) through an EMS VCS3 synth and modulated the filter with a sine wave LFO. The result is a unique and psychedelic sound that works perfectly for the song.

A keyboard instrument popular during Led Zeppelin’s era was the Mellotron, which derived its sounds from tape loops of real instruments. This gave keyboardists the ability to have literally any recorded sound at their fingertips.

Most of the time, the Mellotron was used for emulating string, flute, or horn sections. Jones employed it on songs like “The Rain Song” and “Kashmir.” Ex. 3 is in the style of what Jones played on the bridge of “Kashmir.” An interesting note is that Jones arranged real strings and Mellotron together for the recording.

Always at the cutting edge of keyboard technology, Jones used the mammoth Yamaha GX-1 (also a favorite synth of Keith Emerson) to great effect on the In Through the Out Door album, most notably on the track “All My Love,” where he married classical, rock and prog sonorities into a majestic sound all his own. Ex. 4 is in the style of Jones’ solo break on that song.

Jones wasn’t scared to “bring it on home” when the moment called for it. A perfect example is his piano solo break on “Fool In the Rain,” which Ex. 5 is a tribute to. Jones plays that passage with flare and reckless abandon, while also showing great ability for syncopation and feel. It is truly one of the greatest keyboard moments from the Led Zeppelin catalogue.