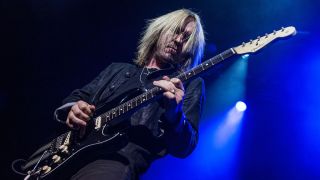 Inspired to take up the guitar by Stevie Ray Vaughan, Kenny Wayne Shepherd’s determined note-for-note study of his hero’s solos has paid off.

As a gifted young player, Kenny scored his first record deal aged 13, and he has released eight studio albums to date. SRV’s influence permeates the Louisiana guitarist’s style; his playing is both fiery and intricate, with lots of bluesy grace notes and slides.

Kenny Wayne Shepherd: the 10 blues guitarists that blew my mind

The minor pentatonic and blues scales feature heavily in his solos, mixed in with Hendrix-like chord-based lines too. Keep this in mind as you tackle this month’s licks.

Kenny rarely plays anything other than Fender Strats. He’s owned an SRV Signature Series, a ’54 Custom Shop model and his favourite, an original ’61 Strat. He’ll often dial in dollops of overdrive for solos, controlling dynamics by rolling back his guitar’s volume for rhythm parts and cleaner tones.

Analog Man Bi-Chorus and MXR Uni-Vibe feature on Kenny’s pedalboard, alongside a Jim Dunlop wah and an Analog Man King Of Tone overdrive pedal. We’ve used a Strat to record this month’s examples. If your guitar has humbuckers boost the treble and lower the bass a little.

The first few notes here are played with fingers rather than a pick, an approach Kenny often takes for softer passages. We switch to a pick after the sustained E note that opens bar 1, ready for the double stops and slides that follow. This is intricate stuff, so opt for a slow, methodical approach to practising.

Perhaps the most challenging of our licks, this packs a punch in bar 3 with some rapid slides and a mixture of rhythms - but it all happens within a small space on the fretboard. Play this through slowly as many times as it takes until you can walk your fingers through the lick without looking. Then you’ll be ready to build up the tempo.

Using a more driven tone, this example weaves lots of grace notes through the main lick. Though it looks pretty fearsome at first, it’s fairly easy to break the line down into shorter phrases. The rests in the notation, shown with three symbols for quarter-, eighth- and 16th note pauses respectively, mark the end of each phrase.

Using a driven tone and a rotary speaker effect, this example captures the vibe of Kenny’s Blue On Black. Note we’re using a fairly small group of notes, largely staying within the D minor pentatonic scale. Proof that you don’t need a huge repertoire of scales to be musically expressive - just be inventive with the ones you know!

Concentrate on the vibrato in situations like this. The first string bend isn’t the easiest place to use vibrato, but with two or three fretting hand fingers braced together, you will gain control. As with all these examples, your phrasing of details such as grace notes and quarter-tone bends gives you your own unique sound and delivery.