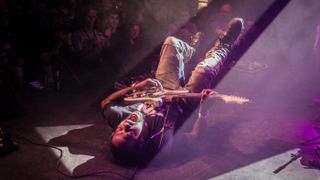 Want to sound like Eric Gales without restringing your guitar upside down and starting from the beginning? Read on and we’ll show you how…

Yes, you read that right - Eric plays left handed on a right-handed guitar, meaning he looks down and sees the strings in reverse position. This unusual way of playing has given Eric a new twist on a classic style in the same way that reversed strings or unusual tunings has informed the work of blues legends Alberts King and Collins.

Eric is an incredibly versatile player, comfortable improvising lush chordal passages with a clean tone, or delivering blistering solos that call to mind players such as Eric Johnson, Stevie Ray Vaughan and Jimi Hendrix. High praise indeed, and, though we haven’t got the space here for a detailed analysis of Eric’s chordal approach, these tab examples will help you understand the way Eric views the fretboard.

Moving through groups of notes, repeated patterns and developing melodic rhythmic phrases is the name of the game here, using a Strat/single-coil pickup guitar. No matter if you are using humbuckers - although you’ll want to dial in a little less bass, and crank your amp’s treble somewhat to get a ballpark tone.

We’ve used a little delay on the first three examples, but just a little room reverb on the last two. Whatever tone or eff ects you use, details like vibrato, string bends and a confi dent attack are most important. Make sure you take your time and have fun!

Played with a slightly swung feel, this example consists of two melodic phrases - both using the F# minor pentatonic scale (F# A B C# E). In a simple, but effective device, the first one ascends and the second descends. Watch for slides, vibrato and the occasional quarter-tone bend - which means you should bend the string slightly sharp.

Here we’re switching to ‘straight’ 16th notes, instead of the unusual swung triplets of the previous lick - a ‘feel’ trick that Eric often employs. Note the position shift in bar 2 after the pause. Using different shapes of the minor pentatonic scale (as well as switching to the natural minor scale in bar 3) gives a slick, more melodic vibe.

Moving to a lower fretboard position, this example mixes slides, string bends and just a couple of quarter-tone bends, which are all a feature of Eric’s style. The wide interval phrase that opens bar 3 may seem unusual at first, but the notes come from both the F# blues scale and the F#m7 chord.

Switching to a more retro, Hendrix-style blues, we’ve gone for a stripped down three-piece approach with just a bass and drums backing track, allowing more room for you to experiment on guitar. An E chord is implied at the beginning, but we swiftly move to fancier things. The nine-note grouping in bar 2 squashes all those notes into one beat.

Eric utilises the idea of descending the minor pentatonic scale in ‘down and up’ melodic steps. There is much to be drawn from this approach, which sounds more complex than it actually is. More experienced players can change the feel to groupings of three, four or even five notes.