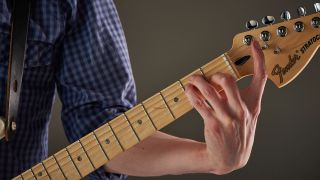 30-day guitar challenge: You may well be familiar with the concept of a pedal note - one that remains static, often in the bass, while other notes and chords move as normal. Let’s turn this concept on its head.

We’ll keep the bass line from our original chord progression, but repeat the first chord over all bass notes. As with regular pedal notes, the interesting bit is finding what unexpected note combinations arise.

The difficulty here is that we’re applying the pedal-point concept to several notes at once. Be prepared for some pretty horrific experiments, as not all chord progressions will work.

Generally speaking, it seems to help if your chords are all diatonic (all derived from the same scale or mode) or, failing that, if the chords change pretty quickly. At least that way, the dissonances are fleeting, and the bass part starts to sound like a riff!

For our starting point above, we’re using a reasonably normal-sounding progression in E major. Get the sound in your head, and we’ll continue…

This one stays the same, because it’s the one we’ll repeat. We’ve used the top four notes, leaving the E and A strings free for the bass, but three would also work. In a band or home studio, you could divide the two tasks between bass and guitar.

This one works really well, as the C#m and E major chords share two of their three notes. The resulting chord here could also be interpreted as C#m7.

With no 3rd (C#), this chord has a nice open sound. Another potential name for it would be Amaj7sus2. Remember to experiment with different ways of playing both the chord (eg, arpeggios, strums) and the bass notes (eg, long, short), and also try putting the chords in different orders.

Another chord without a 3rd - the A note in the original F#m. Another interpretation of this one would have been F#9sus4, and some people also call it F#11, although that’s not strictly correct. Now over to you… experiment with your own ideas!