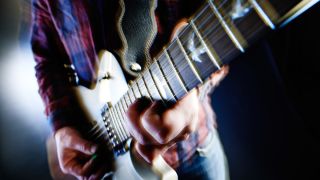 The picking technique itself is much the same as strumming a chord in slow motion. Try holding a barre chord and slowly strumming across the strings, making sure your hand is moving at a steady speed. As your pick passes across the strings the notes will naturally occur at an even rate. With practice you can make these notes conform to subdivisions like 16th-notes or triplets, etc.

The similarity to strumming is important as it is one continuous motion, rather than six individual down or up strokes. So far we have a chord played one note at a time, but with the notes ringing together. The desired effect with sweep picking is to only hear one note at a time; this is where the fretting hand comes in.

The fretting hand is responsible for separating the notes so that only one is heard at a time. This is achieved by muting the five strings you are not using with any fretting-finger flesh you have at your disposal.

Example 1 is a three-string fragment of a chord shape, much like Yngwie Malmsteen or Steve Vai would use. A good way to warm up the picking hand is to hold down the chord shapes and practise moving the pick through the strings. Focus on controlling your hand so it moves in smooth, relaxed down and up strokes. The notes should be even triplets, or three notes per beat. Once you feel comfortable, start following the pick with your fretting fingers.

Example 2 expands on Example 1 by adding two extra lower notes on the fourth and fifth strings in the style of Mattias IA Eklundh. This makes a minor 7th arpeggio (1-b3-5-b7) using one note per string. This time there are five notes per beat, which might take a little getting used to; but all the notes should naturally fall into place if you focus on making the lowest and highest ones fall exactly on the down beats.

The third example is played using six notes per beat and uses all six strings in a John Petrucci style. The arpeggio shapes are based on major triad barre chords, which you may recognise from the CAGED system. Some re-fingering is necessary in order to separate the notes and create a smooth succession of notes, as ideally only one string should be held down at a time, while the remaining five strings are muted.

Our fourth example is technically the same as Example 3 for the picking hand, but this time we adapt the major triad shapes to add some major 7th and 9th intervals to create more colourful sounds, reminiscent of Frank Gambale.

Almost any chord shape or sound can be adapted to create sweep-picked arpeggios, so start experimenting and create your own.

This lick is similar to Ex1, but with two extra notes on the fourth and fifth strings; play these with your first and third fingers. The Am7 and Bm7 arpeggios combined make a Dorian sound (A-B-C-D-E-F#-G). When ascending, mute the bass strings with the side of your palm.

This example starts with an E Major barre chord shape. Play the two notes at the 14th fret with your third finger and roll between the strings to keep the notes separated. When you reach the top move your first finger down a semitone and play the B arpeggio using one finger per fret.

This example is similar to Example 3, but with a few changes to create a major 9 sound. For the 16th fret on the fourth string, reach up with your fourth finger. Play the 14th frets on the lowest two strings with a second-finger barre and return to the 12th fret with your first finger.

Start with your fourth finger at the 12th fret and sweep the first three notes before picking the 13th and 14th frets with an up and a down stroke. For the descending part, use up strokes all the way down, except for one downstroke on the fourth string.