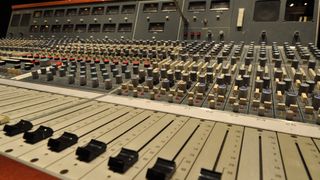 With today’s music software pulling off emulations of classic studio gear so convincing that only the most golden-eared of engineers could tell the difference in the mix, it's never been easier to make your DAW-based tracks sound authentically retro. Here are a dozen production tactics you can try today.

For more on getting a vintage sound in software, pick up the November 2018 edition of Computer Music.

Many classic digital effects processors were prized for the character imparted by their low bit-depth converters. It’s easy to mimic these qualities in software, as there are plenty of bit reduction plugins available - many are free, and your DAW probably has one built in. Used judiciously, these can recreate some of the grit of those early effects.

Bit depth wasn’t the only thing that suffered in effects processors past. Lower sample rate converters were often employed to keep costs down. Many a budget reverb was released with sub-32kHz converters (we’re looking at you, Alesis), and this only added to their charm. Your preferred audio editor might be able to perform sample rate conversion via its resampling function - this can be a quick route to vintage digital bliss.

Recent years have seen a handful of console emulators arrive, designed to add the super-subtle colour and crosstalk of vintage desks to your mixes - Slate Digital’s Virtual Console Collection being one such example. The ‘child’ channel effects are meant to be used on every channel, aux and bus in your mix, which all feed into a ‘parent’ mix-bus plugin placed on the master out.

Tape simulators are great to have, and when used correctly, they can give your productions a bit of that retro mojo. Keep in mind, though, that a bit of tape hiss is easy to achieve - just throw in a sample of the real thing! If you have an old tape player, grab a worn-out cassette and record a bit of the noise during a quiet section. Loop it and layer it into your mix.

Don’t be afraid to experiment with the features of plugins not meant for the task at hand. For example, Ableton Live 10’s Echo effect offers plenty of retro-style options for mucking up sounds, and you can use these without the delay. The Character tab hides Noise and Wobble functions that can be used to artificially age a signal - just ditch the echoes and go for the grit.

Cheap vintage boxes often lacked the full frequency range of modern equipment. You can simulate this limitation by dialling back some of the high frequencies that our modern converters and preamps capture so well.

7. Go outside the box

One obvious way to get a more lively, retro sound is to re-amp your effected tracks through outboard equipment. It can be as simple as pumping it back through some crusty old home stereo equipment, or as elaborate as sending it through a costly classic compressor. If you don’t have one, why not borrow or rent one?

It might seem obvious for us to recommend running a signal through iZotope’s free Vinyl plugin… but that’s because it does the trick! We’re not necessarily suggesting you do so in order to feign a dusty old record; instead, dial up some of the other artefacts that this now-classic plugin has to offer: add electrical noise, mechanical noise and more.

9. Go outside the box… again

Some of the character of old studio recordings came not from the effects, but from the air itself. A snare drum might have been routed through multiple effects, but it all starts with a recording of the snare in open air. Route signals out through a speaker and re-record them with actual microphones, then process them further.

Another ‘outside-the-box’ tip: if you use loops - whether prefab or those of your own creation - you can add some vintage vibe to them by taping them onto a cheap cassette recorder, then re-recording the tape into your DAW or sampler. You’ll probably have to trim and align them again, but it’ll be worth it!

XLN Audio’s RC-20 Retro Color is one example of a dedicated toolkit designed to add compromising colour to your sound. This one offers the unusual Flux Engine, which imitates the subtle sonic instabilities and variances of old hardware processors.

Convolution effects such as Logic Pro’s Space Designer and Acustica Audio’s Nebula4 let you load in your own impulse responses, many of which can be found for free online. Though often associated with ‘sampled’ reverb spaces, IR-based effects are also excellent imitators of vintage effects boxes.