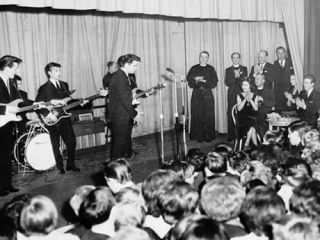 Jet Harris, The Shadows' original bassist, died of cancer aged 71 on Friday 18 March 2011. Jet was one of the first musicians in the UK to play a bass guitar (in 2010 Fender presented him with an award for effectively launching the bass in the early sixties).

GT's own Neville Marten was lucky enough to be able to count Jet among his friends: "Jet was a brilliant bassist and the coolest of guys. He was so advanced, with hugely inventive bass lines on early tracks like Apache - a truly iconic British instrumental. This track was a revolution!"

"I got to know and work with him in his later years (when he had largely switched to guitar). Here's me with The Wildcats backing the late Jet Harris on Marty Wilde's 50th Anniversary tour in 2007.

"We repeated it just last autumn with Jet, plus Eden Kane on the bill and had perhaps the most enjoyable tour ever. This is all the more poignant considering Jet's opening gambit. Funny man and great guy. Glad to have been able to call him a friend."