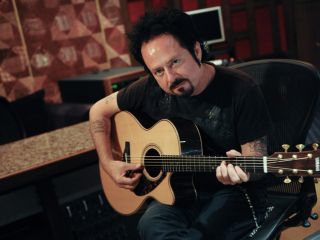 Every month, Guitar Techniques attempts to answer guitarists' playing posers and technical teasers with expert and practical advice. This time we look at counting a triplet-based time signature...

I was trying to play through the transcription to Toto's Hold The Line in August's issue of GT and ran across a fundamental problem: I don't know how to count my way through a bar of 12/8. This means that some of the slightly 'off ' timing in this tune is almost impossible to get from the written transcription.

I can listen to the original song and pick the phrasing up by ear, but I think it's time that I really come to terms with this deficiency and learn to count properly. Is there any chance that you could offer some guidance?

It's be tempting to think that counting through a bar of 12/8 involves counting up to 12 very quickly each time, but that's not the case.

Most time signatures that end in '8' are what we call 'triplet based', meaning that instead of 12 individual beats, you have in fact got four, in very much the same way as a bar of good old 4/4.

It's just that each of the four beats is split into three (see the example below). In other words, triplets.

If you think of the intro to Hold The Line, David Paich's keyboards outline the 'three' feel from the start. The verbal patter to count through a bar is:

This helps outline the fact that the four main beats - the one, two, three and four - are all split into three. Try counting along with the track and you should see that it's a perfect fit.

We've given a couple of examples of the way 12/8 pans out rhythmically in the example below, with the counting regime outlined above. It should help you make headway with the transcription.