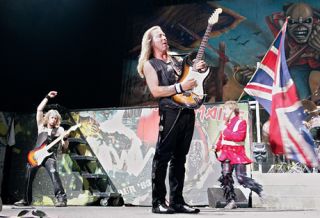 Next month sees the second annual Sonisphere three-day rock festival descending on the hallowed pastures of Knebworth with Iron Maiden, Rammstein, Alice In Chains, Slayer, Alice Cooper, Motley Crue, Europe, Placebo, The Cult, Skunk Anansie, Iggy And The Stooges and may other great acts in tow. We've got a pair of weekend tickets to give away to it!

To be in with a chance of winning a pair of weekend ticket plus a goody bag featuring DVDs and albums from some of the bands playing just e-mail your name and address under the subject line SONISPHERE to guitaristcomps@futurenet.com.

Prize includes camping at the festival but does not include transport.