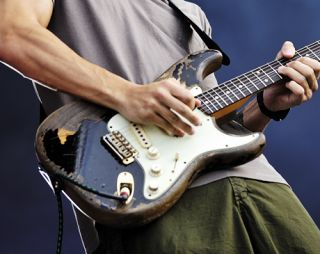 The results are in - after polling your suggestions on Facebook, Twitter and on Guitarist.co.uk, we've totted up the votes and drawn up a shortlist from which YOU will decide the greatest guitar solo of all time.

When we last conducted this poll in 1998, you told that the definitive guitar solo was played by Joe Walsh and Don Felder on The Eagles' Hotel California. This time? Well, things are looking pretty different.

It's no surprise that the classics are still present and correct - where would this poll be without the classic solos in Pink Floyd's Comfortably Numb, Hendrix's All Along The Watchtower or Dire Straits' Sultans Of Swing?

But in the last 13 years, new acts have come to the fore, with the likes of Alter Bridge and Dream Theater firmly establishing themselves in the guitar solo pantheon this time round - who could have predicted John Petrucci would go from nowhere last time, to occupying two of the 20 in 2011?

And then there are the artists who, with the benefit of hindsight, have come to be rightly appreciated for their soloing prowess. How hard is it to believe that in 1998, Slash was nowhere to be found on this list? Unsurprisingly then, he's roared back this time round with the Guns N' Roses classics Sweet Child 'O Mine and November Rain.

There's renewed recognition for the likes of Megadeth's Marty Friedman and Martin Barre of Jethro Tull, not to mention the man we described as "The best British rock guitarist of his generation", Manic Street Preachers' James Dean Bradfield.

Contrast the music of Barre and Bradfield with the likes of Eddie Van Halen and Steve Vai, flying the flag for the shredders, and it's clear that the guitar solo is as broad and diverse a church as ever.

But who will emerge victorious? Can Petrucci complete a remarkable rise to prominence with a win? Will Slash prove he's the rock soloist for the ages? Can Gilmour push on from his third place finish last time to take the prize, or will Felder and co hang on to the top spot again?

It's up to YOU - vote below for your favourite. Vote, then vote again, then tell your friends to vote too! Spread the word, Guitarist is going to find out what the best guitar solo of all time is, and you're going to tell us.

NB - If you can't see the poll then you need to enable JavaScript in your browser to do so.