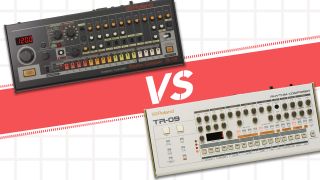 Roland's revered TR-808 Rhythm Composer drum machine was a paragon of punchy percussion matched in legend and impact only by its follow up, the “improved” TR-909.

With secondhand 808 prices nearing the stratosphere, most of us mere mortals will have to settle for a modern recreation, and there's no better place to start than with Roland's own digital duplicates. But, which will come out on top in the Roland TR-08 Vs TR-09 battle?

Upon its release in 1980, the TR-808 didn't make much of a splash and any impact it might otherwise have had was weakened by Linn's LM-1, released that same year. The LM-1 was the first drum machine to draw upon samples of actual drums, offering a realism that the all-analogue 808 could never compete with.

Despite being priced at a relatively low $1,195 (compared to $4,995 for the Linn), sales were lacklustre, with only 12,000 TR-808s produced during its lifespan. This, combined with a difficulty sourcing certain parts, signalled the end of production in 1983.

That isn't to say that the TR-808 went entirely unappreciated. Marvin Gaye's chart-topping Sexual Healing was built on an 808 groove, as was the seminal Kraftwerkian cutup of Planet Rock by Afrika Bambaataa & the Soulsonic Force.

Yet, as was the case with its follow-up, the 808's legend would be forged primarily by secondhand buyers who embraced the very lack of realism that had initially limited the machine's appeal. Indeed, the 808 is all about those simple analogue sounds – that big, booming bass, sizzling snare, and metallic cowbell created the perfect backdrop for hip-hop, the genre with which it has become indelibly identified.

By 1983, sampling had begun to enter the cultural consciousness and digital synthesis was set to explode onto the scene. Yet shockingly, Roland once again turned primarily to analogue synthesis with their next drum machine, the TR-909. While the cymbals and hi-hats were indeed based on samples, the rest of the sounds – including the all-important kick and snare drums – were synthesized. Sure the kick was punchier than that of the 808, but it wasn't fooling anybody.

Despite such niceties as MIDI I/O and an improved accent function, the TR-909 sold even less than its predecessor. Yet again, it would be re-discovered by secondhand buyers, many of whom would use it to fuel their four-to-the-floor dance tracks, often pairing it with the TB-303 Bassline.

A never-ending cacophony of pleas notwithstanding, Roland has steadfastly refused to re-issue the TR-808 or its successor in their original analogue forms. However, in 2014, their outstanding TR-8 tapped a combination of samples and digital modelling to produce convincing facsimiles in a single gaudy, glowing package. They followed this up by cramming their analogue and digital modeling into the diminutive “Boutique” editions, the TR-08 and TR-09. As of this writing, the TR-09 has been discontinued but is still widely available, while the TR-08 can be picked up for $379/£369.

Like all of Roland's Boutique machines, the TR-08 and TR-09 offer miniaturized approximations of the original units, with modern functionality. For example, whereas the originals offered 1/4” 'Master' outputs alongside individual outs for each drum, the Boutique models provide mini-jack main and headphone outputs and USB connectivity for the individual outs.

Needless to say, the various drums on offer are the same selection as on the original units, and are physically arranged in a similar fashion. They share the same tweakability, too, with control over tuning, decay and a few other parameters, depending on which sound is being edited.

For better or worse, the Boutique models are tiny. On the plus side, this – and an ability to run on battery power – means that they are eminently portable. However, the restricted footprint necessitates that their various knobs, buttons, and switches also be 'lilliputian'.

Build quality is decent, but they don’t feel as weighty or well-built as their namesakes. While this will likely go unnoticed to neophytes accustomed to board-mounted pots and jacks, such modern builds will seem a little flimsy to old-timers weened on through-hole technology and panel-mounted hardware.

As with the vintage variants, both TR-08 and TR-09 offer the now-familiar grid-based sequencer. While performances can be recorded in real time, most users will make use of the step-entry method, in which a drum sound is selected and activated on a per-step basis using the 16 buttons arranged across the bottom of each machine.

Comparing a 909 to an 808 is something of a fool's errand. They each have a specific character for which they are loved. The sound of the TR-808 might be described as less precise than that of the TR-909 – especially when it comes to the kick and sampled hats – and the Boutique versions differ similarly.

Comparing the sound of the new versions to that of the originals is trickier. The original units were built from high-tolerance components that often differed greatly from unit to unit. Calibration routines were performed to match factory specification, but that too was subject to imperfections. As a result, one 808 might sound noticeably different than another. As for the 909, that was subjected to a few changes by Roland themselves, and there is (natch) some debate about which version sounds best.

Nevertheless, despite such potential for irregularity, the Boutique TR-08 and 09 versions sound very much like idealized versions of the originals, with less noise, and we'd be hard pressed to tell the difference in a mix.

Like the Boutique machines, the Cloud versions make use of Roland's modeling technology to digitally recreate the sound of the classic x0x units and, again, do a fine job at providing the user with a convincing clone.

Of course, all of the benefits of modern technology have been added in, not to mention some nifty upgrades to the UI, most significantly a rather spiffy multi-track variant on the onboard step sequencers. Of course, being a subscription service, you'll be shelling out £18.95/$19.95 monthly (currently available with a free 30-day trial) for the privilege of using the plugs, though you can choose to keep one for every year you're subscribed.

When is a choice not a choice at all? When each option is well-suited for a specific purpose or persuasion. If you are the sort for whom only the real thing will do and can afford to both purchase and maintain a decades-old device, you'll be in lofty company.

If, on the other hand, you want something that fits in your backpack – and was actually built in this millennium – the Boutique beatboxes will serve you well, provided you don't mind the minuscule interfacing.

If you simply want to add a bit of classic beatboxery to your in-the-box productions – and can get on with the subscription model – Roland's Cloud is the obvious choice.