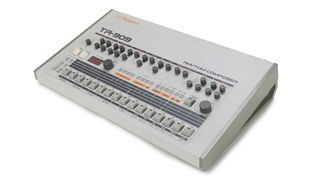 Roland ‘80s-era engineers must have felt a bit like Cassandra, the mythological seer that could foretell the future but to whom no one would listen. It must have been terribly frustrating to know they were onto something brilliant, only to watch it wither on the vine of indifference. And it must have been even more maddening to watch as musicians and producers eventually recognised the value of their brainchild long after production had ceased. This was, however, the curse of the Roland groovebox, a familiar tale that seemed to forever be repeated.

Case in point: the TR-909. Like the TR-808 and TB-303 that proceeded it, Roland's TR-909 was not considered a commercial success, having shifted only around 10,000 units during its two-year production run. A high-tech hybrid that combined analogue synthesis and primitive sample playback with a feature-packed rhythm sequencer, it offered a tighter, punchier sound than the 808, along with then cutting-edge features like MIDI interfacing.

All in all, it seemed like a desirable package, and it was priced competitively. So what went wrong?

It might be hard to believe now, but the problem with the TR-909 was its sounds. At the time, musicians and producers longed for realistic drum sounds, and the 909's obviously synthetic kick, snare, hat, toms, and clap were seen as passé. Sure, the sampled cymbals were an 'improvement' over the metallic noise offered by its predecessor, but the 909 simply could not compete with the realism provided by entirely sample-based offerings from Linn and Oberheim. Producers were looking for a convincing substitute for a real drummer, and the 909 was never going to be that.

Eventually, of course, it would become clear that the TR-909's synthetic sounds were ideal for creating defined, intricate rhythms that could pierce through the din of a packed club. The 909's kick drum thumped hard but didn't overwhelm; its snares snapped and sizzled, carried aloft by skittering hats and a clap. It may not have been rock n' roll, but maybe that was the point. The TR-909 didn’t sound like a real drummer, and to a small number of forward-thinking underground musicians, that was a Very Good Thing.

By the late 1980s, secondhand 909s were being snapped up by producers who preferred the robotic rhythms of Kraftwerk to the cluttered and muffled bombast of the Kerrang crowd. These intrepid experimenters would forge new forms of dance music that were not destined to be confined to the underground, influencing both the culture and industry of popular music.

As with the 808 before it, the 909's sounds offered some malleability. Most of the sounds could be tuned, and the decay of toms and kicks could be tweaked. There was, of course, the snare's curious 'Snappy' knob, alongside a Tone control. Many of the sounds could be accented with the sequencer. Further sound-shaping could be performed externally, thanks to the proliferation of individual audio outputs.

As for the sequencer, the TR-909's came in the form of the now-familiar 16-step row of buttons along the bottom of the panel. 96 patterns could be created and stored, along with eight songs. Sequences could be synced to incoming MIDI clock, or to older devices via Roland's DIN sync. The 909's shuffle function is the stuff of legend, and helped the device to earn its place as the de-facto beatbox for house producers.

Today, the TR-909 commands breathtaking prices on the used market. However, those who are willing to settle for an emulation have plenty of hardware and software options from which to choose. Not surprisingly, the 909 has been sampled to death, and both individual hits and looped phrases are easily found online.

If you want an actual TR-909, you're going to have to shell out big bucks. However, if you want a software clone, you can go straight to the source. Roland's Cloud service offers an ever-growing collection of software versions of its famous instruments, the TR-909 among them. The sound is based on Roland's circuit-modelling tech, and the sequencer is a dead ringer for the original.

Swedish software house AudioRealism has earned a stellar reputation for its superb recreations of groovy gear, and the TR-909 has not escaped its notice. In fact, it is one of three classic drum machines on offer in its AudioRealism Drum Machine (or ADM for short), with 909 sounds sitting alongside excellent emus of both 808 and 606 machines. As an added bonus, users can dump their original 909 patterns into ADM via SysEx.

d16 Group insists that Drumazon's sounds are synthesised in exactly the same way as those that appeared on the original TR-909, and given the quality of sound on offer, it's hard to argue. The sound-shaping features found on the original have been extended and expected modern niceties such as MIDI Learn and total recall have been included, as well.