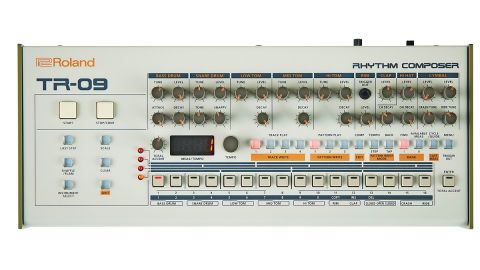 Portable and with the flavour of a real 909, it's capable of great results. Extra analogue outs and more sonic tweaks would have been welcome.

A few months on from Roland announcing  its digital reincarnation of the TR-909 and the noise about the apparent folly of Roland rejecting the analogue world is still raging.

The fact that it started long before the TR-09 landed says as much about the debate as any direct audio comparison might. Let's not even delve into the possible problems associated with making comparisons of musical hardware via compressed internet-based audio, or the less than scientific approach of switching the audio source while saying which unit is active - after all, who is going to admit that they can't hear the difference between the cheap digital copy and a real analogue legend?

Let's get this out of the way first - the review TR-09 didn't sound the same as a real TR-909 sat beside it. On some sounds, even when tweaked to be as close as possible in terms of timbre, the differences were obvious.

But this is entirely unsurprising. The original 909 underwent various changes during its lifetime that both corrected issues and (intentionally) altered the sound. Roland lists all of the alterations in their TR-909 Service Notes.

Secondly, being a largely analogue beast (where even the digital playback elements are linked to, and play through, analogue circuitry) there's no reason why two 30-year-old original units would even sound the same. Finally, on many recordings where we think we hear a 909, it may in fact be a sample (possibly via a 12-bit ADA stage) - and heavily processed at that.

So it is with all this in mind, that Roland introduced the world to its next round of Boutique units utilising the ACB (Analog Circuit Behavior) modelling technology found on the earlier Aira TR-8 drum machines.

Remove the TR-09 from its box and the visual and functional similarity to the real thing is clear - albeit in a much reduced, battery-powered footprint. Unlike the original, the top panel is made of metal which helps make it feel more substantial than expected. Button placement is broadly similar, so anyone familiar with the 909 will be able to create Patterns and Tracks without reading the new manual. The ability to chain patterns was an annoying omission in the earlier TR-8.

Knobs have similar functions, though the parameter ranges are, in most cases, quite different to the real 909 test unit. One downside on the TR-09 is the size and feel of the knobs, making editing fiddly at times. There are some sub-functions littered throughout the interface, but these are generally indicated on the front panel.

The TR-8 had an increasing number of hidden key presses that became frustrating to remember. Although the TR-09 still only offers a basic four-digit LED display, there is at least a way of adding extra parameters more sensibly via the Edit button.

So far, it's possible to adjust internal gain for each sound, tuning for Rimshot, Clap and Hats, and decay for Rim, Clap, Crash and Ride. Roland has also added full Pan implementation in the latest update. Unlike the original you have full CC control via MIDI (and USB) of most parameters.

Turning back to sonic comparisons with a late model TR-909, the differences are striking. When the Snare and Clap play together, the TR-09 exhibits the expected phasing quality caused by the sounds sharing the same internal noise source - a good way to hear when samples are being used.

The one area where a break from exactly replicating the real thing might have been worth it would be in the ability to change the overall pitch of the kick drum. On this subject, Roland has remained silent on its overall approach to emulating the 909.

We suspect that it chose favourite sound versions from the various revisions - don't forget some people backwards mod their 909s for the V1 kick sound. Also the TR-909 main outs were known for removing a hefty chunk of the low-end due to overzealous DC-blocking capacitors in the mix path - something (thankfully) not included in the TR-09.

This begs the question as to why Roland couldn't be more explicit with all of this, and perhaps offer different mods for each voice based on authorised revisions (or even after-market mods).

Also, although additional outputs can be harnessed when connected to your DAW via USB (and hardware hacking is off-limits with DSP boxes of this type), we would like to have had at least a couple of extra analogue outs, even if accessed via an optional expansion port. Price may also be an issue. The TR-09 seems the wrong side of £300, though street prices may well fall with increased supply.