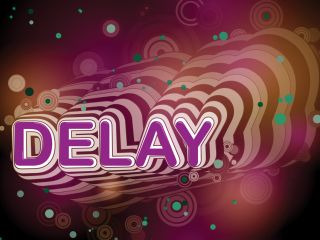 Delay: it goes on a bit.

Is there an echo in here? If you happen to be sitting in a recording studio, chances are there is indeed an echo (or two) sitting in the rack or on the hard drive. By far the most common function of the delay effect - echoes - make an appearance on just about any mix you can name.

In the earliest days of rock 'n' roll, slapback echo adorned the vocal recordings of Elvis Presley, Buddy Holly and others. It was an easy sound to create, by simply feeding a tape back to the record head without erasing the material that already existed on the tape.

This was often achieved using a pair of tape machines, but it wasn't long before dedicated echo boxes were introduced to grateful musicians, particularly those of a psychedelic bent.

Needless to say, these tape-based units were quickly overtaken by their digital descendants, and the initials DDL (for 'digital delay line') became common parlance among musicians and studio engineers. These units worked by sampling the incoming audio and replaying it alongside the dry signal. They would serve as the templates for modern software delays, even if they were quite simple by comparison.

Today's delay effects are as diverse as the producers who use them. They run the gamut from simple digital echo boxes that play back exactly what you put into them, to much more elaborate devices that provide synchronised echoes and a bevy of modulation options. Some developers go to great lengths to provide dead-on accurate emulations of the gritty, grainy digital and tape delays of decades past.

So what exactly is a delay, and how does it work? At the simplest level, a delay does just what the name implies: it delays an incoming signal. Old-school units used tape or digital sampling technology, whereas modern plug-ins operate by recording the incoming data and storing it in a buffer.

Normally, the length of delay is determined by the user and the buffer will spit out the signal after the specified length of time. Some plug-ins provide a number of interesting ways to manipulate the buffer's output, however, resulting in backwards signals or any number of odd, glitchy effects.

Delayed playback is fine, but it means very little if it is not paired with the dry signal. That isn't to say that it has no use at all - in fact, a delayed signal can be used to adjust timing or phase discrepancies. For the classic echo effect, though, the dry signal needs to be present. Like most effects, delay units usually provide a means by which the original signal and the processed signal are mixed together.

In addition to the basic delay effect, there is usually some form of 'feedback' or 'regen(eration)' on offer. This function determines how much of the effected signal is fed back through the effect, providing multiple repetitions of the processed signal. Each one of these repetitions will gradually fade out as new ones are created, unless you have the feedback cranked up full, in which case the signal will keep compounding until it reaches a deafening squall.

Just about any delay is going to provide some method of control over the delay time. Some will be of the free-spinning variety, displaying their values in milliseconds, while others will be lashed to the host's tempo and provide their timing values as beat divisions.

Choosing the appropriate delay time is crucial. Short delays (50ms or less) can be used to simulate double-tracking, while delay times of 100ms or longer will provide the classic slapback echo. Longer still will put you into space-rock territory.

In addition to the bog-standard delays described above, you might encounter variations on the theme. Ping-pong delays are quite common, providing a stereo output wherein alternating echoes are hard-panned in the stereo sound field. Multi-tap delays are also a popular choice - these behave the same as those described above, with the exception that multiple delay lines are provided, each with independent times and levels.

Many of the best delays are those that combine delay effects with other processing, particularly filter or modulation effects. Both of these are present in retro-style tape delay or early digital delay emulations. You see, the echoes of a vintage delay unit degraded over time, losing frequency content and timing stability.

Likewise, it is fairly common to find an LFO onboard their modern-day counterparts. This is provided as a means by which the pitch and timing of the echoes can be altered over time. Such effects can be used to simulate chorusing or flanging, as well as wacky, seasickness-inducing wobbling.

Needless to say, the above applications are just the beginning. There are loads of clever delay designs out there, ranging from reverse echo generation to wild, crunchy dub-echo devices. Often a delay will be built into an instrument, even becoming an integral part of its architecture. Modular synthesisers often come with a delay module in tow, and great fun can be had modulating the delay parameters with various other bits in a complex patch.

As we've suggested, delay is a vital element in any production, even when you don't consciously hear it. Delay lines are crucial in chorusing, reverb and other effects processors. In fact, they're so ubiquitous that you probably already have a number of them to hand, so open them up and get to know them!

Now in its second incarnation, Timeless is maxed out with all manner of modulation. At its heart it's a classic stereo tape delay, but FabFilter has added filtering, time-stretching and its magnificent modulation matrix. Tap tempo is supported, or Timeless can sync to the host.

A wonderfully advanced multi-effect built around a spectral delay. Incoming audio is separated into multiple frequency bands which are treated independently. LFOs, spectral filter and gate are included to warp your sound, and modulation can be 'drawn' into the Analyzer Point View. Neat!

One of a trio of delays built around its classic hardware units, the PSP 42 adheres to Lexicon's design and is approved by Lexicon. A stereo unit with a very retro sound, it has all the original's modulation options plus the ability to invert the feedback and delay channels.

Togu Audio Line has provided yet another brilliant freebie with this vintage-style delay effect. There's a 12dB filter on board, along with the ability to set independent delay times and feedback for each channel (though these can be linked if you want). It can be used as a plain old filter too.

For a comprehensive selection of effects tutorials and techniques, check out Computer Music Special: Effects (issue 47) which is on sale now.