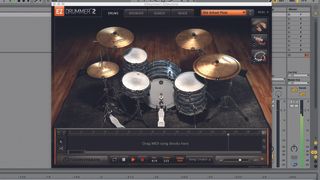 While the kick provides the boom and the snare brings the bap, the hi-hats are the glue that binds them together, gives them high-frequency context and makes them groove.

A pair of cymbals, usually 13" or 14" in diameter, mounted face to face on a footpedal-operated stand, the hi-hats sit to the left of the snare drum in a right-handed drum kit. By striking the top cymbal with drumsticks and opening and closing them with the pedal, a surprisingly broad array of sounds can be elicited. Very broadly speaking, they're usually played on every eighth- or 16th-note in a pattern, constantly and relentlessly, pausing only when the stick that would strike them at any given point is required by another kit element.

Programming realistic hi-hats isn't difficult, but the key to authenticity lies in thoughtfully combining the various articulations offered by your virtual drum kit (you need at least closed tip, closed shoulder, pedalled, half open and full open samples, preferably with round robins) and making good use of velocity. Standard practice is to have the offbeat strokes at lower velocity than those on the beat, which is how a drummer would generally play them.

In this walkthrough and its accompanying video, we'll take you through six fundamental programming techniques guaranteed to get your hi-hats sounding like the real thing.

Step 1: For typical use, the drummer keeps the hi-hats clamped shut and plays them with sticks. However, striking the top hat with the stick's tip sounds different to clobbering the edge with the shoulder of the stick, and drummers often use both. We've done this here by alternating the MIDI notes for tip and shoulder articulations.

Step 2: Bringing the two cymbals together with the footpedal results in a 'chick' sound that works in a supportive role rather than as a leading 'ride' voice. It can often be heard in the background on the offbeat when the drummer switches to riding on the ride cymbal or toms, or to keep time during intros or breaks.

Step 3: Hitting open hi-hats with sticks delivers an explosive sound that can be thrown in for variation and phrasing. An essential consideration in any sampled drum kit is that it lets you assign closed, pedalled and open hats to choke groups, enabling closed and pedalled notes to immediately kill open ones.

Step 4: Of course, the hi-hats can also be fully ridden open, as any rock drummer will tell you. This is as heavy and aggressive-sounding as hi-hats get, and ideally, your ROMpler will offer a few degrees of openness for emulating the creative fluctuations of a real drummer.

Step 5: 16th-note hi-hats, played by alternating hits in both hands, emerged in the disco era and are still a standard in many genres. Be sure to never have a snare hit at the same time as a hi-hat hit - the hands are alternating, remember - vary the velocities, and mix up tip and shoulder hits as you go.

Step 6: Bernard Purdie-style hi-hat "kicks" (opening and closing the struck hi-hats quickly to accent kick hits) are great for injecting a bit of funk, while an open hat splash on top of a snare can really nail the end of a phrase. Keep your kicked hats short by choking them with quiet closed or pedalled hits.