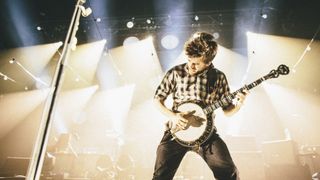 When you consider the banjo, you'd be forgiven for assuming that its just the guitar's twangier, countrier cousin. However, the instrument has recently shaken off its southern porch-front roots - you can now hear it as a featured instrument in plenty of pop, hip-hop and rock tracks.

Although there are many different types of banjo, including four- and six-string variants, let's focus on the more popular, modern five-string instrument for the purposes of this tutorial.

Although banjo performers have a variety of different playing styles at their disposal, the basic techniques can be categorised into either country, bluegrass or rock. With bluegrass, the banjo's strings are not often played together but picked individually in patterns known as 'rolls'. The most famous rolls were perfected by a banjo player called Earl Scruggs, who used a three-fingered style to intersperse fast patterns around the melody of a song.

When programming banjo rolls in MIDI, remember which strings a real-life player's fingers would be using. The middle finger would normally be playing the high D3 string, the index finger would be playing the B2 string and the thumb would be alternating between the other three strings: G2, D2 and G3. Of course, each string can play be fretted to play notes higher than the note it's tuned to, but not lower. Use this knowledge to make your MIDI sustained notes more realistic.

This means that it's rare, for example, that you'd ever hear two of the lower, thumb-picked strings in quick succession - a human couldn't play that fast. With rock banjo (think Mumford & Sons), the instrument is often strummed instead of picked in arpeggios, much like a guitar.

As long as you bear in mind the number of strings and the pitch limitations, programming a realistic MIDI strummed sequence is simply a case of getting the string order and pitches correct. To find the most common solution for any chord on the banjo, use the search function at banjochords.net.

One thing we've yet to mention is that banjo players tend to use a lot of slides, pull-offs and hammer-ons when playing. Much like classical guitar styles, the player will use the fretboard to embellish sequences. In this tutorial, we'll show you how to fake it in yer DAW like a banjo pro, so saddle up and let's get goin'.

Step 1. We'vewritten a simple riff here using a basic banjo patch in Logic's EXS24 sampler, and we've used quantisation to keep everything in time. In the below audio, you can hear that the samples already have quite a realistic tone, but the MIDI programming is somewhat lacking. We've made sure to write my riff around the real-life banjo strings of D2, G2, B2 and D3.

Step 2. If we needed a riff suitable for modern folk/rock, then the straight rhythm of the MIDI would be quite suitable. However, wewant this riff to have a swung Bluegrass feel, so we're going to need to change the timing/feel of the notes. In Logic this is as easy as clicking Quantize » 8D Swing in the Groove pane. Next we'll simulate some slides between notes.

Step 3. Weadd a new track with the same EXS24 samples and settings, but change the sampler's envelope Attack time to 45ms, taming the initial transients. We then add some extra notes on the second track (shown here in green) using these modified banjo samples. The notes immediately before the slide notes are extended so that there's no gap between them.

Step 4. Wecan exaggerate this slide effect by applying a subtle pitchbend to the longer MIDI notes before the green slide notes. we allocate just those notes to a separate new track (we'll explain why in a sec) and program a little pitchbend towards the end of each note in the direction of the slide. In the first 4 bars of the audio, these notes are played on their own.

Step 5. Now we have three tracks for just one instrument. This is so we can extend the non-sliding notes to emulate sustained picked strings without them being affected by the pitchbend. We're careful to only extend the notes that a real player could let ring before having to play the same string again.

Step 6. Lastly, let's enhance the human feel using other multiple-sampled velocity mapped EXS24 samples: we use Logic's Humanize function to apply a small amount of velocity randomisation, which triggers some different sounding samples. We also Humanize the start positions of the notes for timing realism and add a couple of fretboard scrapes in the longer gaps between notes.

Emulating the fast picking styles of bluegrass banjo can be a challenge. To help you pinpoint exactly what's happening in those frantic riffs, find some audio of a banjo being picked and then slow it down in your DAW.

Alternatively, if you'd prefer to create your own rolls from scratch, there are great resources online for learning the basic traditional patterns.

The banjo enthusiast's site atelfshot.com/banjo/rolls.htmhas notated rolls and accompanying MIDI files. For a more comprehensive selection of examples, browse to banjohangout.org. The site is geared towards real-life banjo players, but a lot of its information can easily be translated into MIDI. Don't miss the jukebox player with hundreds of examples of banjo styles.

There are a few realistic ROMplers out there which include samples of slides, hammer-ons and pull-offs to make programming easier and more realistic. Check out the Bluegrass Banjo at boldersounds.net and RealiBanjo from realitone.com.