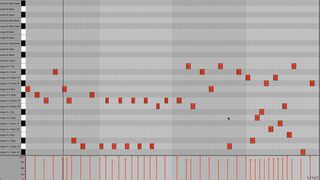 The congas are a set of one to four long, floor- or stand-mounted (depending on whether the conguero is sitting or standing) drums made from staves of wood, like barrels, or fibreglass, giving a louder, brighter sound. From lowest to highest, they're named tumba, conga, quinto and requinto. The conga is used for the solo option; conga and quinto for a two-drum setup; and tumba, conga and quinto for the three-drum rig, which is as far as we'll be going for the purposes of this tutorial.

The bongos are a pair of far smaller stave- or solid-constructed drums - the little one called macho, the larger one hembra - again available in wood and fibreglass, and mounted on a stand or held between the knees. Generally speaking, the congas are meant to play a relatively constant and underpinning role, whereas the bongos can be more frenetic and 'lyrical'.

In this tutorial, we'll show you the basic conga and bongo patterns and demonstrate their practical application alongside acoustic and electronic drum parts. We're going to be using Ableton Live's Latin Percussion Live Pack, since it features a pretty good range of conga and bongo articulations.

Step 1: Here's the rhythm that serves as the foundation of the majority of conga (and bass) patterns in Latin dance music: 'tumbao', played on a single drum (the conga). It comprises a very specific series of 16 strokes, involving the heel and fingertips of the left hand, combined with open strokes and slaps in the right hand.

Step 2: Let's bring in a second drum: the bigger, lower-pitched tumba. All we have to do is move a few notes over from the conga to the tumba to change the rhythm up significantly. I've also thrown in a little triplet fill at the end, being careful to keep the articulations sounding authentic - triplets are very important in Latin music.

Step 3: Two congas are often enough, but if you're feeling confident with your programming, you can always add the quinto for a third, higher-frequency voice. You can also hear some flams (closely played pairs of hits) at the end of our pattern.

Step 5: Here's a rather more developed bongo pattern, involving accented hits (called repique) and 'rolled' multi-finger hits, which are helpfully supplied in Live as separate articulations. Never forget the importance of leaving spaces in the groove, enabling it to breathe.

Step 6: Many congueros mount a pair of bongos over the top of their congas. To maintain that authentic feel when programming conga/bongo combos, remember that they're being played by one pair of hands, so think of them as a single set of five drums rather than one set of two and another set of three.