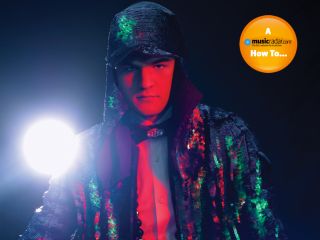 Grum - aka Scotsman Graeme Shepherd - is an electro/disco/house DJ and producer. When he's not holed away in his studio in Leeds, he can be found playing out at international hotspots including Bestival, The Warehouse Project and Razmatazz.

Three singles released in 2009 received rave reviews in NME, Mixmag and Future Music, and set the blog world alight. Grum is currently putting the finishing touches to his debut album, due in April.

How did you get into producing tracks?

"When I was around 14 I got really interested in dance music and production in general. When I develop a passion for something like that I need to know everything about it, so I bought loads of Dance Nation CDs and gradually got into some cooler stuff.

"I really wanted to learn about how to make my own music, so I got a shareware version of FruityLoops and spent a couple of years playing around with that. I had always made music to learn about technique, but in around 2006 I decided I wanted to use this knowledge to develop my own sound, which is when the Grum stuff came about."

Was getting into DJing primarily a means to getting your own tracks heard?

"Actually I got myself some cheap belt-drive decks when I was 15 and got into DJing purely as an extension of my love for music. It was more just a fun thing to do at weekends with mates - playing loud music and annoying the neighbours.

"Of course, since my productions have become popular, my DJ sets have been more in demand. This has meant really getting into the role and attaining a deeper understanding of what DJing is about. When the bookings started coming in I started out using Traktor, as I wanted to use technology to enhance what I was doing. Eventually, though, I found that I preferred using CDJs and the freedom they give."

How and when did you get your big break?

"Most of my DJ gigs have come from my online production presence, so I guess when the blogs started heavily featuring me it all took off. Early on I ended up having gigs all over the world due to really passionate party promoters loving the music.

"Things aren't so quick in England, maybe due to saturation, so it's been a harder slog here to build up my profile. Having regular plays on Radio 1 has helped greatly. Really it's a constant process with incremental gains, rather than having one big break."

What are the most important qualities and skills a good DJ needs to have?

"For me, the main role of a good DJ is to play some awesome music and create a hedonistic vibe in the club. People go out to have a great time and as an escape from everyday life, so it's important to fulfil that need.

"Everyone says that super-tight mixing makes a great DJ, but for me the tune selection is just as important, if not more. I think the DJ must meet peoples' expectations in some ways; for example, I always try and play lots of my own music, and people will also expect to hear some big current tunes. However, it can be good to throw in a few curveballs by dropping tracks that would perhaps not be expected - I like to play some early 90s piano house when I can get away with it!

"Set progression is also quite important for me - I think there should to be ups and downs. The old cliché is a rollercoaster ride, but it works. The music can be used to play with the audience's emotions."

What are the most important elements of a track from a DJ's perspective?

"Well, I think it's good to play tracks that fulfil different roles during my set. Different elements from specific tracks are effective if used at the right time. I like to play tracks with a massive breakdown or build-up after playing some heads-down, groovy stuff for a little while.

"Contrast is very important. I often also do edits of longer tracks and choose the best bits to keep the momentum going in my sets."

What's been your best DJ gig, and why?

"I really enjoyed playing Fabric early in 2009. I was playing a warm-up slot, which is not typical of me, but I relished the challenge of bringing up an empty room ready for the first headliner to get going. It meant I could drop some tunes I wouldn't typically play at peak times, such as Aeroplane and Cerrone."

"I don't think that's really something to think about when getting into it, unless you're planning on being a wedding DJ or something like that. It's not a reliable income source. It was tough for me initially, but I was lucky in that I fell into it when I finished university rather than having to choose between a normal career or music.

"At a certain level it can be good as it can be an instant source of income, which gives artists time to work on music during the week rather than having a full-time job."

What's in your setup, and what are your favourite bits of gear?

"My production setup is very lean at the moment. I've got a MacBook Pro running Logic 9 and loads of plug-ins. For monitors I've got Yamaha HS50Ms and Alesis M1 Actives. That's it really, save for a couple of hardware things like an Alesis PicoVerb and a cheapo compressor. I've got a DigiTech Bass Synth Wah, which is quite fun.

"When I'm DJing I just use two CDJ-1000s and a mixer, and I usually ask for a DJM-800 mixer as it has good effects - the filters are awesome.

What are the essential plug-ins that you couldn't do without?

"Since changing from Cubase to Logic I've really explored the plug-ins Logic comes bundled with, which I think are mostly excellent. ES2 is an excellent synth in my opinion. ES P is great for arpeggio-type stuff, and I use Minimonsta quite a lot for Moog-y bass sounds.

"Mostly I like to use free or cheaper plugs. I found a really cool free transient designer called Flux Bitter Sweet II, which is good for adding punch to drums. Nomad Factory BT Analog TrackBox is also a great channel strip plug-in for warming up sounds."

Where do you find new tracks to play out, and how can aspiring producers/artists get their tracks heard by DJs?

"I'm in the fortunate position of being on a few mailing lists, which makes things a lot easier as I'm short on time right now. I think the biggest list just now is Your Army.

"I'm not entirely sure whether or not producers can send in their tracks - normally they just send out stuff from the bigger labels. I also like to discover old gems that maybe haven't been given too much airplay recently - for example, I really got into the Strictly Rhythm back catalogue and found a whole load of awesome stuff from that to play.

"I try and check out all the tracks that individual producers send me on sites like MySpace as well, but it's a pretty tough job keeping up. When I get some free time I try and scour the blogs for interesting stuff too.

"I think for an up-and-coming producer wanting to get their tracks to DJs, the best thing to do is set up a good MySpace page and try to get in touch with some bloggers who can post their music."

Dream of a career as a DJ/producer? Get the brand-new Computer Music Special: How To Make It In Music, out now, to find out how to make it a reality.