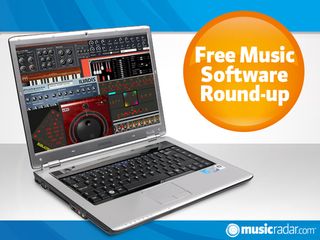 The free software round-up may have been on its mid-summer break, but it seems that developers of the stuff certainly haven't. Plug-ins aplenty have been released during the past couple of weeks - read on to find out what they are and where you can get them.

This open-source reverb is based on "the figure-of-eight reverb structure suggested by Dattarro, which uses a bank of all-pass filters to smear the phase followed by a loop of multi tap delay lines that feedback into themselves to create echoes". Eastwood has also added another delay and a multitap delay to act as predelay and early reflections.

Drawbar organ emulations seem to be disproportionately common in the land of free plug-ins - this latest offering is modelled on a "well-known combo organ from the '60s". As well as the organ emulation, there's also a vibrato unit with adjustable speed and depth.

A couple of quirky effects plug-ins from Pluggotic with suitably offbeat names. Squosc is a seemingly unpredictable compositional aid that features constantly running oscillators that are modulated by an envelope follower, while Footile is based on a serial multi-FX design. The plug-ins come with presets that are described as "horrible" and "unsuccessful" respectively.

This cutdown version of g200kg's KeroVee (which has just been updated) is a basic voice-changing plug-in. It enables you to make a male voice sound female and vice versa. You can also add a robotic-style effect into the mix.

A traditional-looking synth that gives you a pair of oscillators and filter and envelope sections. There are chorus and delay effects, too. You might be put off by the fact that only eight presets are supplied, but this is a simple looking instrument so programming your own shouldn't be too difficult.

Designed with the forthcoming FreePlayer guitar effects controller in mind, this pitch bending effect (the acronym stands for Son Of A Pitch) is said to be suitable for use as a virtual whammy bar and for more extreme pitch bend tasks. The dead zone control enables you to adjust the pitch response to suit your playing style.

This real-time granulator effect is capable of playing up to 20 grains simultaneously, with each grain having individually adjustable delay, amplitude, panning, duration, filter, pitch and glissando settings. It's open-source, and the developer is currently seeking help in creating a Mac version.

What was it we said about organs being ripe for emulation by freeware software developers? Here's the second version of Euthymia's Electronic Organ, a Hammond clone that now offers improved percussion and key click, a new vibrato/chorus unit that's delay adjustable, overdrive and more drawbars for the pedals.