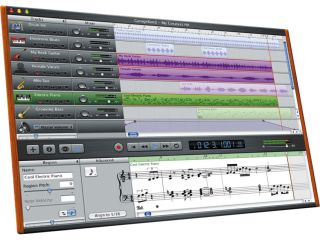 GarageBand's GUI has remained remarkably similar since its Inception in 2004.

Despite only being around since 2004, Apple's entry-level DAW GarageBand is ﬁrmly established as a favourite software package for beginners and professionals alike.

The story of GarageBand starts with Apple's purchase of Emagic in July 2002. Apple's acquisition of the German software company also led to the arrival of co-founder Gerhard Lengeling as senior director of software engineering (music applications).

At the time, the stage was nicely set for Apple to expand its interest from professional music applications to home users and beginners.

The ﬁrst-generation iMac, released in 1998, had revitalised Apple's proﬁle in the home computer market so it made reasonable sense that Apple should also target consumers with their audio software.

On his arrival in Cupertino, Lengeling didn't just set about working on Logic 6 for the Mac, he also took charge of a team developing a new product based on a simpliﬁ ed version of the same audio engine.

The new software, known as GarageBand, was announced at the Macworld Conference & Expo in early January 2004. Featuring digital audio recording, MIDI sequencing, plus support for plug-in effects and virtual instruments, GarageBand offered a taste of pro music software in a friendly, intuitive style.

The horizontal timeline setup was familiar, but more importantly it was simpliﬁed just enough to make it appeal to beginners.

Back in the garage

Regardless of its audio capabilities, for most users the single most important feature of GarageBand was its price - or rather, the absence of price.

From the introduction of version 1.0, every new Mac has included a full, unlimited copy of GarageBand as part of Apple's iLife software suite, which also contains iMovie, iPhoto, iDVD and now iWeb. The latest version of the iLife suite is also available as a £45 upgrade.

Although GarageBand offered many of the features found in much more expensive DAWs, its critics argued that a handful of omissions marked it out as a toy for amateurs rather than a serious music production tool.

Most notably, the maximum recording quality of 16-bit resolution and 44.1kHz sample rate was markedly lower than most of the competition, and GarageBand was only capable of recording one track at a time. Nevertheless, there was no doubt that underneath the fun user interface lay a powerful sound engine.

Traditionally, the synths, drum machines and effects bundled with cheap DAWs weren't up to much. In the past decade however, software developers have really stepped up their game and even the most basic DAW comes with a handful of useable synths and effects.

GarageBand is no exception, offering a little of everything the user might require. Scan down the list of GarageBand Modules under the Sound Generator menu and you'll see that the focus is distinctly on virtual emulations of real-life instruments.

Electric piano, guitar, horns, strings and the like mean that instrumentalists can ﬁll in the gaps around their own performances. For those of us seeking electronic sounds, the selection of analogue, digital and hybrid synths offer a variety of sonic options.

The instruments may only offer basic editing options but they're more than capable of producing excellent sounds. The effects cover the most common bases with simpliﬁed editing options.

Load up the compressor and you're presented simply with sliders for threshold, ratio, attack and gain. No valve emulation modes, vintage modelling or sidechains here.

The simplicity of GarageBand's effects makes them far easier for beginners to master and once you outgrow them you can always upgrade.

From the ﬁrst version, GarageBand came loaded with a broad selection of virtual instruments, effects and loops (both MIDI and audio), but Apple also provided a number of expansion routes.

GarageBand was notable for its introduction of two new proprietary formats from Apple. For samples, Apple Loops arrived, based on the AIFF ﬁle format but with added metadata to store information such as tempo, pitch, loop length and time signature.

The Audio Unit format was also adopted for effect and instrument plug-ins, allowing the sound palette to be upgraded with ease.

Over the next couple of years, GarageBand was slowly updated to introduce new features with each iteration of iLife. 2005 saw the arrival of score editing and multi-track recording, while GarageBand '06 ﬁnally introduced mid-track tempo changes.

During this period of the product's development, Apple focused heavily on promoting the optional Jam Packs, collections of loops, samples and software instruments designed to expand the creative scope of the basic package.

The pack concept helped keep GarageBand fresh for users, while also simplifying the expansion process. Although you could achieve similar results with Apple Loops format sample libraries and Audio Unit plug-ins, Apple's themed collections took the uncertainty out of expansion for users who may never have added a plug-in to any software before, let alone music software.

For users who felt they may outgrow GarageBand, Apple ensured that the software maintained strong links to their pro audio software. All GarageBand projects open in Logic (as, for that matter, would all their Apple Loops and AU plug-ins).

Audio content and plug-ins aren't the only optional extras Apple recommends for GarageBand. The company's close working relationships with Apogee and Euphonix have led to a range of top quality hardware accessories aimed at GarageBand users, with the ofﬁcial endorsements offering wary buyers reassurance that everything will play nicely together.

For the money there are very few audio interfaces that can beat the Apogee ONE or Duet. M-Audio also got in on the act, with products like the iControl, a simple low budget control surface released in 2005, aimed directly at GarageBand users.

More recently, the Apogee GiO interface takes the form of a guitar pedalboard and control surface that integrates neatly with GarageBand's (or Logic's) effects and amp simulators.

There are plenty of generic alternatives on the market too, but the safety net of ofﬁcial Apple support can't do any harm when it comes to helping prospective buyers choose their product.

In the summer of 2007, iLife '08 brought with it a new version of GarageBand, a major upgrade that introduced 24-bit recording and export, multiple takes on one track, note and chord name displays for software instruments, the ability to print musical notation, new effects and more advanced automation controls.

On a slightly more wacky note, the new Magic GarageBand feature allowed users to piece together custom jam sessions and backing tracks as easily as selecting a genre and choosing a few instruments.

The idea was interesting, and it demonstrated Apple's increasing focus on GarageBand as a learning tool, but the release of GarageBand '09 in January 2009 took things to another level with the introduction of the Lessons feature, which allowed users to download additional content to help them master their instrument.

The wide range of Artist Lessons on offer features video advice from the likes of Sting, Norah Jones and John Legend on how to play some of their most famous songs.

GarageBand '11, announced in October 2010, introduced a handful of updates to ensure the package stayed up to date. Most notably, Flex Time, only introduced to Logic in 2009, was brought in to enhance GarageBand's time-stretching, allowing users to apply note timing correction and Groove Matching features typically found in more advanced DAWs.

GarageBand may be simplistic in comparison to most other DAWs, but it's still a highly capable program in its own right. Rather than concentrating on what it can't do, consider just how remarkable it is that so many top features have been crammed into a program that's given away free with every Mac.

While it's a stretch to call GarageBand a stripped-down version of Logic, both programs are based on the same audio engine and GarageBand can deﬁnitely be seen as a suitable ﬁrst step for musicians who will later graduate to Apple's pro software.

Having said that, for many users GarageBand does everything necessary to record and produce complete tracks. Consistent, well-focused development by Apple has ensured that the program remains ideally suited to beginners and experienced producers alike.

As a low-budget DAW there are few comparable packages.

Liked this? Now read: A brief history of Propellerhead Reason and Record