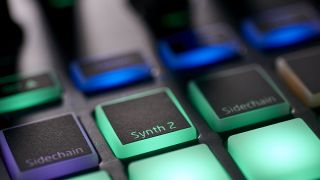 In our review of Novation's Circuit, we highlight its tweakable interface and fantastic sequencer. At the time of writing, though, we also noted that one of its few weak points was the slightly cryptic nature of its onboard sound design tools.

Circuit packs in two polyphonic digital synth engines - based on Novation's Nova range - which are controlled via eight 'Macro' rotaries. In its self-contained mode, these Macros are great for experimental tweaking, but they're somewhat limited when it comes to deeper editing of synth sounds. Fortunately, with the recent release of a software editor, that's all changed.

With this nonet of tips, we'll show you some of the useful things that can be done with the Circuit Editor and, of course, Circuit itself. For Future Music's full guide to Novation Circuit, pick up the May issue (FM304).

There are two ways to save any sounds created using the Circuit Editor to the hardware. Saving a Session on the hardware itself will capture any sound edits, along with all current sequencer info, drum patterns, effects and automation. This will keep your edited patch available for the current Session, but won't make it available to other Sessions on the device.

Alternatively, using Upload Patch To Circuit within the Editor overwrites one of Circuit's presets, making your synth patch available to all Sessions, but not capturing any sequencer or automation information.

Circuit comes with Save disabled. Before you do anything else, activate it by holding down Save and Shift when turning the unit on, or you won't be able to store any of your work!

3. Create your own synth editor

The 'hidden' synth parameters controlled by the Circuit Editor application are all editable via MIDI CC messages, so it's possible to create your own editor using any customisable hardware or software MIDI controller. Obviously, replicating the entire functionality of Isotonik's Editor would be tricky, but consider picking a few key parameters - Filter Freq and Resonance, or the Oscillator shaping parameters, say - and assign them to your device of choice to gain instant control over specific areas of every Circuit synth sound without the need to dive into the Editor and reassign Macros. TheMIDI Guide is free to download.

If you're using Circuit to sequence external gear and don't want to hear the built-in synths, turn them down in the mixer but don't mute them - muting turns off the MIDI output too.

Feel like your melodic lines stick too rigidly to 4/4 format? Circuit's synth sequencers allow you to change the lengths of patterns individually. Try a simple 4/4 bassline on one synth using the full 16 steps, with an atmospheric synth sound on the other with the pattern length set to 12 steps, to create an interesting rhythmic offset.

A bit of simple maths lets you create some creative patterns. For example, a standard 4/4 phrase is made up of four 16-step patterns - 64 steps in total. Try accompanying this with four 12-step patterns and one 16-step, to create a complementary 64-step phrase but with a different rhythmic template.

Don't want to use Circuit's Scale modes? Or sequencing the synths via a DAW or MIDI input? Set the Scale to Chromatic to allow the full range of notes to be played.

As we've shown, the Circuit Editor is an essential tool for any owner. There is, however, the outside chance you might get a little carried away with it and end up saving over the bulk of Circuit's presets, only to lament the loss of the factory sound bank. Fear not, as the Editor comes bundled with a SysEx file containing all the original sounds.

In the Editor, simply hit Load Bank From Disk, select the Circuit Factory Patches file (which will be in .syx format) and Upload All Patches To Circuit. In the same way, you can save your own banks of patches to your computer's hard disk and bring them in and out of Circuit as needed.

Looking for new patches or fresh ideas? A good community of Circuit Editor users should start to spring up if it hasn't already. Join Novation's Circuit Owners Facebook group to stay in the loop.

9. Keep your firmware up to date

The latest firmware update enables Circuit to record MIDI data from its inputs, as well as output it. Perhaps the most interesting consequence of this is that you can transfer chord patterns or melodies from a DAW into Circuit's two banks of eight patterns.

This has some handy implications for live performers. Say, for example, you've created a track in the studio using hardware instruments and are looking for a way to trigger them live without using a laptop. Simply record the chord or melody data into Circuit and hook up its MIDI output. Similarly, if you've got a sampled chord progression, bass or lead line you like the sound of, but want to try playing using one of Circuit's built-in sounds, you can use something like Ableton's audio-to-MIDI functionality to harvest the MIDI data, then 'bounce' it into Circuit for some instant inspiration. Just remember, if you don't want Circuit to snap your MIDI to a scale, set it to Chromatic mode.