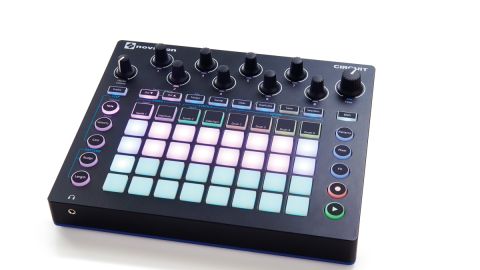 Circuit is fun, fluid and intuitive with a strong range of built-in sounds. Highly recommended.

Launched somewhat out of the blue at the start of October, Circuit is Novation's first groovebox (not counting 1995's rack-mounted, x0x-emulating DrumStation).

It's a standalone, digital instrument featuring a four-part drum machine, two six-note polyphonic synths and a deceptively deep sequencer. In the words of Novation, Circuit is "designed to inspire", with a heavy emphasis on immediacy, intuitiveness and experimentation. However, despite this being new territory for the British brand, there's a lot about Circuit that feels familiar.

For one thing, the device takes most of its design cues from the recent Launchpad Pro. Its chassis features the same combination of matt-black top, rounded corners and rubberised base, while its central sequencer grid is built from slightly smaller versions of the Launchpad's backlit, velocity-sensitive pads.

Build-wise, Circuit feels slightly more lightweight and plastic-y than the Launchpad Pro, but still gives the impression of being a well-built, quality piece of kit.

In terms of connections, Circuit features a stereo pair of 1/4-inch jack outs on its rear, along with a 3.5mm headphone out on the front panel. There's also a built-in speaker on the underside, which outputs at a decent volume but, predictably, lacks a little in low-end power.

For true portability Circuit can be powered either by AA batteries inserted into its base or via a mains connection on the rear panel.

Finally, just like the Launchpad Pro, Circuit can send and receive MIDI both via USB and 3.5mm MIDI In/Out ports. Again, as with the Pro, Circuit ships with the required MIDI adaptors, USB cable, batteries and a power supply.

Circuit's links to previous Novation products run deeper than mere cosmetics though. The engine under the hood is based on the company's Nova line of synths, and much of the workflow borrows heavily from the Launchpad Pro.

In fact, in use Circuit feels like something of a 'greatest hits' from Novation.

That Nova sound engine is impressive too. It has a distinctly digital quality to it, but that shouldn't be taken as a criticism. Rather, where many of Circuit's direct rivals have set their sights on replicating the raspy, analogue quality of classic monosynths, Novation's groovebox excels at the sort of complex polyphonic sounds you just couldn't get from an analogue synth at this price point; all full of interesting textures and modulation.

There's a decent range of sounds onboard too. Each of the two synths can select one of 64 preset sounds, which range from bold leads and modern basses to rich pads and atmospheric textures.

The four drum parts, meanwhile, also share a bank of 64 sounds, which are divided into four groups along the lines of kicks, snares, cymbals and claps/percussion. As with the synth sounds, there's a nicely broad selection on offer, which goes beyond the usual x0x-mimicing staples you tend to find in budget grooveboxes (although there are a few of these included too).

Editing sounds is handled by a bank of eight continuous rotaries along the top of the unit. With either of the synths selected these become eight Macro controls, used to tweak and shape a relatively cryptic assortment of the chosen preset's parameters.

Novation states that, where possible, these Macro controls are broken down into pairs editing - from left to right - oscillators, envelope, filters and modulation. In reality though, the structure is fairly vague and there are numerous presets that don't fit the arrangement.

We've developed something of a love/hate relationship with these macro controls during our time with Circuit. Novation state that its lack of clear labelling is designed to encourage happy accidents, and there's certainly something to be said for this; there's plenty of fun to be had selecting presets at random and blind-tweaking the controls, which often throws up fantastic, unexpected sounds.

But, when searching for sounds with more of a specific idea of what we were after, we regularly found presets that almost fit the bill but didn't quite offer the necessary controls to, say, tweak the amp envelope or filter cutoff in the way we wanted.

Drum editing is a little more straightforward. The four drum parts are divided into pairs which share a sequencer page and bank of rotaries, with four Macro controls for each drum part.

These are more reliably arranged to control, from left to right, pitch, decay, distortion and filtering. These controls work nicely for editing the onboard sounds - the distortion/ saturation in particular can be really harmonically pleasing.

All in all Circuit is a bit of a mixed bag on the sound design front. It certainly lives up to its desire to deliver immediacy but, particularly on the synth side, this comes at a cost in terms of depth.

We'd love to see an editor application from Novation in the future, to give slightly deeper and clearer access to synth parameters via USB connection. There's still plenty of variety onboard though, which prevents Circuit feeling limited.

If Circuit is a touch shallow on the sound design front, it more than makes up for it with its frankly excellent sequencer. While, on the surface, it offers just a standard 16-step sequencer for each of its six tracks, there's a whole raft of workflow features that make Circuit hugely intuitive and flexible to compose with.

Sequences can either be played in and recorded using the velocity sensitive pads, or inputted step-by-step by holding down the corresponding sequencer pad. Down the left-hand side a trio of buttons allow users to flip between views for editing note, gate and velocity for each step, the latter two doing so in the 'fader' format that will be familiar to Launchpad users.

There are also views for nudging a pattern forward or backwards in one step increments and changing the lengths of sequences - although the latter can't be used on drum sequences, which is a shame, as it would have been a nice tool for creating interesting polyrhythms.

The hold/touch functionality from the Launchpad Pro has been included here too, which allows users to jump momentarily to an editing view by holding down the corresponding button, or switch to that view permanently by quick pressing it.

When playing and recording parts in the Note view, the top two rows of pads are used to play a selected scale, which can be moved up and down in octaves by buttons along the top row. This playing area can be expanded to fill the whole pad grid via a shift press, allowing for more dexterous playing if you're so inclined.

Both the root note and scale itself can be changed, with a total of 16 different scales on offer. Along the right, meanwhile, are buttons used to enter Pattern mode - for selecting and chaining patterns together - the FX view, and a mixer view.

The mixer itself offers mute buttons for each channel along with individual volume control (via the Macro knobs), but unfortunately there's no pan. Finally, there are play and record buttons to the bottom right of the unit. It's certainly worth noting that with record active, not only note inputs are recorded, but also automation for all Macro, Mixer and FX Send adjustments.

Circuit isn't without the odd omission - in fact, we could fill another few pages with features we'd like to see added in future versions. In particular, it misses the ability to export channels separately, either via USB interface like the TR-8 or as a Live project like Circuit's closest rival, the Korg Electribe.

As it stands, if you want to take your creations further in a DAW you're realistically going to end up muting and separately recording in parts. It would be great to get some more info on Circuit's MIDI capabilities from Novation too - in tests we managed to sequence a hardware synth with Circuit, and use Ableton Live to drive it.

However, we suspect the device's MIDI abilities may go deeper than one might first imagine, but at the time of writing there's no official implementation info.

Still, none of this detracts from the fact that we've grown very fond of Circuit during our time with it.

Novation was aiming for inspiration and immediacy and it has really achieved that with aplomb. You'll need to scan the manual to get the hang of a few shift functions, but beyond that, Circuit is an absolute joy to sequence, compose and experiment with.

It's got the makings of a great live tool too, although a little extra MIDI clarity and control over Macro assignments would really help in that department.

In short, Circuit has a broad, quality sound palette, inspiring workflow and a sequencer that bests instruments four times its price. For those reasons it comes highly recommended.