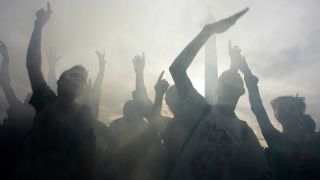 Hands very much 'in the air'. (Image credit: Jean Marmeisse/Corbis)

The frenetic breakbeats, bouncing basses, warped vocals and distinctive piano stabs of early rave and breakbeat hardcore records provided the soundtrack for many a youth growing up in the early '90s.

This style of music evolved from the Chicago acid and Detroit techno scenes that crossed the pond to UK and European shores in the late '80s, and was a sound sculpted by a new generation of producers who no longer needed advanced music theory skills and access to pro studios to make music. For the first time, any wannabe producer could gather a budget home studio setup and sequence speaker-shaking tunes geared towards the raves of the day.

Despite the fact that early rave music sounds rather dated when compared to today's standards, many of us still harbour a deep-rooted love for those iconic sounds that laid the blueprint for all the sub-genres that followed. Most modern forms of electronic music still feature plenty of nods to those tearing stabs, plastic pianos, chopped funk breaks and processed vocals that we know and love.

With that in mind, we present nine tips for the producer who wants to create a classic rave banger in the modern world. For more rave production advice, check out the full Rave revisited feature in the April issue of Future Music (FM303).

Be sure to scour eBay for great deals on secondhand kit from the rave era. Obviously, analogue classics such as Junos and Jupiters are continually soaring in value, but '90s digital synths and rack gear can be picked up for peanuts.

Music theory laymen were able to compose seemingly complex riffs using a little programming know-how. After loading up a one-shot sample of a chord in a sampler, they'd play this note up and down the keyboard to form a recognisable 'stacked' chord riff. It was a technique borrowed from Chicago house, but taken to pacier extremes using the accelerated bpms and eccentric chord stabs of rave.

If you don't have the funds to kit your studio out with the actual gear used, then you'll want to fill your hard drive with plugin emulations that do a similar job. One of our favourites is TAL's BassLine-101, which admirably replicates the SH-101.

In the mid-to-late-'80s many embraced new forms of synthesis such as the Yamaha DX7's frequency modulation (FM) and the Korg Wavestation's wave sequencing technology. This can be heard in the rave tunes of the era, and especially in the shimmering, evolving pad sounds heard in tracks such as Zero B's Lock Up.

To recreate these types of pads, use slow ADSR envelope settings, plus plenty of filtering, resonance and modulation. Don't get hung up on analogue or VA synthesis: turn to FM or wavetable synths to build harmonically-complex and evolving textures you'll never coax out of a Moog

Apply medium-length reverb to a stab, resample the sound with the reverb baked in, then cut off the end of reverb tails abruptly for a choppy, sampled feel.

The sloppy, choppy nature of primitive sampling gives old-skool tunes their personality. Often, modules were sync'd up by hand, then the sounds were all recorded in live from the sampler or mixing desk directly into the multitrack tape recorder or DAT machine.

This live approach led to on-the-fly mutes, solos, volume fades and chops - essentially 'happy accidents'. Listen to popular rave and hardcore and you'll notice how parts don't always fade out perfectly, and samples are cut off abruptly mid reverb. Recreate this in your DAW by recording chops, cuts, transitions and edits in live via a MIDI controller.

Use your sampler's looping features to extend short samples into sustained sounds, as a '90s producer would to save sampler memory.

As rave artists realised they could use any recorded sound as an oscillator, they sought out more outlandish samples in the race to elevate their sampling prowess above the competition. Whistles, horns, crowd noise, dog barks, laughter, movie snippets and cartoon-style 'boings' are just a few examples.

To emulate this sampling naivety, loop up a one- or two-bar MIDI note then use your sampler's browser to cycle through folders of random sounds on your hard drive. Once you hit upon a sound that might fit, head for the sampler's transpose dial and pitch your new sound effect to fit your track.

In the modern studio, if we need a reverb or delay on multiple channels, we can pile on as many plugin inserts as we need in a project to get the job done. Rave producers didn't have this luxury: budget hardware samplers featured few effects, and decent outboard rack units weren't always cheap. Listen to early '90s dance music, and you'll notice a distinct lack of obvious effects.

These restrictions forced producers to think outside the box and come up with DIY effects using the tools they had available. To generate a phaser effect on a budget, they'd layer two copies of the same signal in a sampler before nudging one ever so slightly out of time with the first. Another common technique involved creating basic delay effects by simply repeating notes of the same sound over and over - for example, with the second note set to 75% volume, the third note to 50%, the fourth to 25%, and so on.