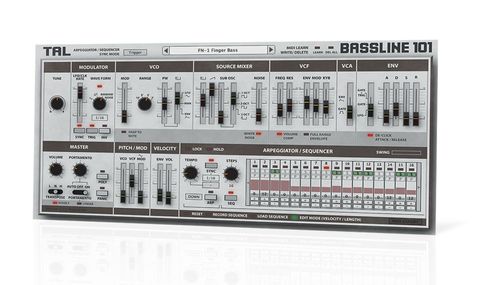 TAL-BassLine-101 is the most convincing virtual SH-101 yet - if that's the sound you're after, this is the synth to get.

The name Roland isn't mentioned anywhere on Togu Audio Line's website, but both the name and shape of their new TAL-BassLine-101 plugin (VST/AU) blatantly recall the ever-popular SH-101.

Released way back in 1982, this was one of the last great monosynths of the initial analogue era. Pre-MIDI, the 101 offered a simple sequencer, a single oscillator (with sub- oscillator) and just one envelope generator, shared between the amplifier and filter. And yet, it sounded fabulous. Its simplicity was an asset - you couldn't help but make good sounds on the thing - and its very reasonable price made it incredibly popular with the industrial and new wave acts of the day.

TAL-Bassline-101 appears only slightly more complex than the original - mainly because you can actually see what's going on in the sequencer/arpeggiator section. Also, as you'd expect, TAL-BassLine-101 is polyphonic, although it can also operate in mono mode if you want it to.

As on the original, you're provided with individual level sliders for saw, pulse, noise and sub-oscillator waves - the sub-oscillator is, authentically, restricted to two pulse widths, one or two octaves below the pitch of the main oscillator. The oscillator setup may not sound like much, but with clever mixing, you can actually create some quite interesting waveforms with it.

The filter is a 24dB self-oscillating resonant low-pass model. You can modulate it with the envelope generator, LFO or keyboard, and it's a zero-feedback delay design, as is all the rage these days. A handy Volume Comp mode can be activated to compensate for drops in level at high resonance settings.

The envelope is a standard ADSR type, and although you only get the one, any SH-101 user will know that you can modulate the amp separately by switching it to Gate mode, enabling the envelope to be dedicated to the filter. It may not be the ideal solution, but it's certainly authentic!

Further modulation is provided by the LFO. As on the original, you get saw, square, random and noise shapes. Here, however, you can sync them to your host without laying down a click track first! Oh, and you can snap the VCO modulation intensity to musical note values, which is very cool.

A smattering of 'left hand' controls are provided, enabling you to play with portamento, transpose the pitch and adjust the response of both the pitch and mod wheels. TAL's 101 also gives you velocity control over envelope depth and volume.

The sound of TAL-BassLine-101 is staggeringly similar to that of the SH-101. Even the basic default patch left us eyes wide and mouths agape. We've used plenty of SH-101s in our time, both real and virtual, but this baby truly nails it. A remarkable emulation. The question, though, is whether it's really worth the asking price.

TAL also offer a freeware plugin based on the SH-101 (TAL-BassLine), and a damned fine version it is too. If you don't demand absolute authenticity, you could probably get by with that one - or any of a dozen others. However, if you must have that exact sound and don't want to invest in the real thing, you'd be crazy not to drop 60 bucks on TAL-BassLine-101. It's incredible.