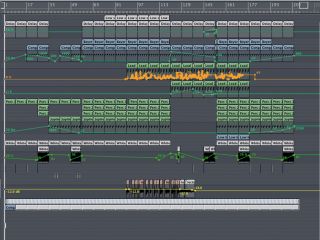 A minimal house arrangement doesn't have to have a lot in it, but what's there needs to be right...

By straddling the line between deep house, tech house and proper techno, minimal house is enabling DJs from all of these genres to push the boundaries. Indeed, today you'll see many heavyweight techno DJs, including Richie Hawtin and Josh Wink, focusing their sets and studio output on minimal house. Even some big name trance and progressive DJs are starting to get in on the act.

Of course, minimal house is also being created in home studios around the world, which is why MusicRadar has put together this selection of essential production tips. This may not be a musically complex genre, but you'll need to learn some specific technical skills if you want to master it…

1. To enhance the energy of your tracks, add pre-delay to certain elements, such as basslines, riffs and, occasionally, percussion. For example, if you have two hi-hats playing on the offbeat try pulling one slightly forwards. There are no hard and fast rules for length, though, so experiment 1ms at a time.

2. Minimal tracks are inherently glitchy, as they use a variety of evolving and unconventional delays, flanging and other effects. This makes it one of the only genres for which the default random preset on Audio Damage's Replicant plug-in is ideal. Try using it on delayed 'plinky' lead lines for some truly stunning and unique effects.

3. A classic trick for creating breakdown builds in minimal tracks is to increase the rate and feedback controls on a delay until it causes it to really scream. Then, at the very peak of the build, carefully pull the feedback and wet level right down to zero.

4. Sidechain gating can sound good with pads, but you can also use a thin-sounding riff with huge amounts of fast delay as a substitute. Insert a sidechain gate so that you get tiny bursts of riff and delay, producing a sound that's a little more interesting than a regular pad. After that, add some more rhythmic delay!

5. One of the best ways to come up with minimal riffs and percussion is to play very basic patterns and then apply tempo delays (even to basslines, although you'll probably need to filter some of the low frequencies off the delays). Whenever you're working on riffs, have a delay already set up for experimentation.

6. Simple riffs need exciting production to keep them… well, exciting. Try setting a pitchbend range of 24 on your bassline, copy an eight-bar part, transpose it up 24 semitones and then draw in a pitchbend line from the bottom-left to the top-right of your MIDI CC editor for a four-octave rise to use in breakdowns.

7. Tempo-based ping-pong delay is a useful tool for breaking up a track and helping it flow between sections. Gradually switch between fully dry and fully wet towards the end of eight bars, then pull the wet signal out a split second before the start of the next section.

8. We often put effects on individual channels but forget that we have a perfectly applicable main output too - and minimal house is ideal for some output bus action. Try assigning a high-pass filter, tempo delay or low-pass filter across your main out and apply it judiciously.

9. The only thing better than using individual processing is using them in combinations. Try dropping down to one delayed synth part, pitchbend it down over one octave, insert a sidechain gate to the main output, and trigger it with eight short notes for a rhythmic, turntable-breaking effect.

10. If you're using a certain sound to duck all the others through your sidechain bus and you already have ducking compression applied to the channel, it will also be ducking the track you're using to trigger the effect! Create an identical channel to the trigger, mute its output and use that as the source.

11. Minimal house is meant to sound spacey and tripped-out, so apply loads of panning and tempo-based tremolo alongside some manually timed tremolo. Stereo wideners will also add to the vibe. Be careful not to overdo the effect on bass-heavy sounds, though, as this could seriously effect the balance of your mix (although it can sound cool in drops and breaks).

12. Minimal house requires crazy effects, so before you start, create a couple of effects buses with the craziest reverb and delay settings you can come up with. We're talking ducking, panning, low-cuts, compression, more compression, widening, EQ, enhancers and maybe even a little gating. Then use automation to generate short bursts of sound with them.

13. Whenever any element is sounding too sensible or straight, reach for a pitchshifting or chorus effect. Try layering a riff with a quieter version detuned by five semitones, then throwing across a nice five-voice chorus plug-in. This will turn anything into an all-spinning, all-dancing backroom blaster.

14. Glitchy effects, such as the ones Audio Damage's Replicant produces in its default mode, sound much better, groovier and less disruptive if you place them before a delay, as the repeats put back the groove and roll. This even works with heavy edits over the whole mix - place a tempo delay on the output and only raise the wet signal when you need to.