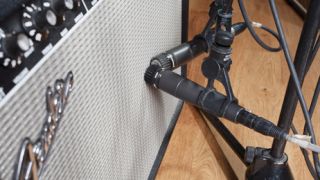 Whether you're looking to fix a dodgy recording, restore an old demo track or just do away with irritating mains hum, we've some handy tips to help...

If there's a word in your vocal that's just plain wrong (ie, a wrong lyric or mispronounced word) and you don't have any extra takes to comp from, try reconstructing the missing word using syllables taken from other words elsewhere in the song. Is the same phrase sung in the next chorus, for example?

Your DAW has the editing power to copy, paste, tune and tweak the smallest fragments of audio, so it's always worth a try. Bear in mind that many consonants (such as T, C, P, K, and S) are unpitched, so you don't need to take tuning into account for these - they can be taken from anywhere they occur in the song, regardless of the note the word is sung at!

Match of the day

If you don't have a 'matching' EQ (one that superimposes an EQ curve from a good-sounding source onto a different one to make it sound similar), try using two spectrum analysers, one on the track you want to emulate, the other on the track you want to adjust, and using EQ to make the displays match up manually. Even better, some analysers have multiple inputs so that you can see curves from two sources overlaid on one display. Or if your analyser has a stereo mode, hard pan the two signals left and right and route them into the analyser.

If you're using a noise reduction plugin such as iZotope's RX2 Denoiser on a sound, be sure to place it before any compressors in the plugin chain. This is because compressors raise the level of the noise floor relative to the required audio, not to mention making the noise floor move dynamically, which would make the job of any noise reduction processors placed afterward more difficult.

Drum triggering is fairly common, but why not "trigger" other instruments? Most DAWs now have some kind of audio-to-MIDI conversion for pitched instruments, which could be a possible solution when faced with a part whose sound is otherwise beyond salvation. Simply convert the part to MIDI and use a high-quality virtual instrument instead.

For converting polyphonic parts, you'll have to look into Celemony's Melodyne. Alternatively, get stuck in and reprogram the part by hand - time-consuming, but possibly less so than the work needed to make a badly played/recorded part work in a mix!

In a real recording, musicians generally play along to the drummer, even if the drummer themselves is not playing precisely with the click. So if you quantise only the drums, or just the instruments, you might kill the groove!

Our demo project was recorded to a metronome click, which helped our editing processes greatly. If your audio hasn't been played to a click, though, you might want to spend some time building a tempo map before getting stuck into editing. Some DAWs have tools to help with this, or even features to build a map by analysing the audio.

When you've got your corrective processes and plugins in place, consider rendering/bouncing the track to a fresh audio file to cut down on plugin clutter and general confusion. You can then delete the original (keeping a backup in case you need to go back to it), or just mute it and disable the plugins, re-rendering if necessary.

Tools of the trade

There are some fantastic dedicated tools out there for restoring, rescuing and repairing dodgy audio. Zynaptiq's Unveil and Unfilter allow you to remove reverb and dodgy frequency responses from signals respectively, while dedicated correction tools like Celemony Melodyne and Antares AutoTune can be used to adjust the pitch/timing of performances.

There's a limit to how far badly recorded tracks can be made to sound better, so don't drive yourself crazy trying to make yours sound like your favourite commercial records. Indeed, sometimes it's best to embrace the weirdness of your audio and make it a feature of the track.

If you've got the opportunity to rerecord your parts with a better sound, then go for it! But don't ever forget that a great performance with a shoddy sound is often preferable to a pristine recording of a mediocre play- through.

A perfect example: the vocal on Christina Aguilera's Beautiful was recorded as a rough demo take, complete with headphone spill. The raw emotion of that take could not be bettered by later studio efforts, so the producers went with the demo version.

Obviously, the best way to clean up your recordings is simply to get them right in the first place! For help with this, check out Computer Music Special 62: Home Recording - The Ultimate Guide. Packed with tutorials on everything from capturing drums, guitars and vocals, to turning your house into a recording studio and multitracking a live band on your iPad, it's a must-have for anyone even vaguely serious about recording. It's available in shops, at myfavouritemagazines.com and on Zinio and Apple Newsstand now.

Otherwise, pick up the November issue of Computer Music (CM197), for loads more on tidying up recordings.